My latest column on this week's internet wildfire:

Why the "White Board Girl" Meme Was So Popular

The link that launched a million laughs has, perhaps predictably, been exposed as a hoax. The Gawker gleefully "exposed" the pranksters and a lot of #HOPA tweets were predictably misogynist in their tone as they slapped down a woman who was presumably too ready to declare herself attractive (how dare she!).

This focus on the pranking and suckering misses the point: why it spread like wildfire across the world. It spread so fast that traditional social media trend watchers were way behind the dozens of women (repeated globally) who all sent it to each other...
Read the rest: http://news.bitchbuzz.com/why-the-white-board-girl-meme-was-so-popular.html#ixzz0wQKXyKNm

I'm off to North Carolina tomorrow morning for some r-n-r with Susan and Mildred -- and Ron and Birdie and all the kitties. Well, not quite all the kitties: Susan lost Chelsea this week. She was nearly nineteen. Her health had just became too frail. I think many of you know the pain of losing these little friends who are such a big part of our lives. I will miss her. My heart goes out to Susan. 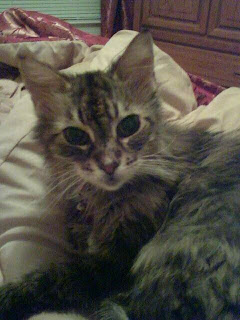 Indeed, condolences to Susan. And no points for idjits who can't appreciate a joke unless it's "True"...particularly if they have no better response than Hey, she's not Hawt anyhow...

Another reason I'm not such a FaceBook fan...the link to this post was not allowing comments to go through, as framed by FB.

Wow, am I tired of all the spam posts I have to keep deleting. This post in particular seems be drawing them: gee, wonder why?