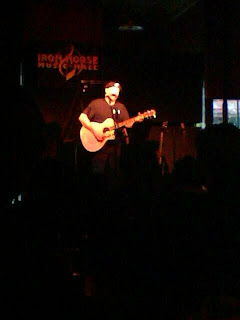 Too many late nights; too little sleep. Far too much rain driving back from Massachusetts.

Last night it was Neil Innes at the Iron Horse in Northampton, MA. Here he is wearing his moustache in order to sing in French (okay, mostly in a French accent). Yeah, phone pic so the quality isn't good. But we had a good time. I went with my pal Peg and we had a nice Thai dinner before the show and then laughed and sang a lot. Innes had the crowd in the palm of his hand from the start, getting folks to sing along on the chorus of the first song (well, second if you count the two line of "Urban Spaceman" he sang), which was "Alone, alone, alone." Yes, it was like that all night as he switched between guitars and a uke and a Steinway. He stopped in the middle of the first song on the piano because the pedal made the piano move. "I should be a professional and just go on," he told us, "But it frightened me!"

We were of course all sworn in as Ego Warriors (second time for me). Well worth the drive and a whole lot of fun. He expressed amazement that the Rutles have been around for 30 years now and that there are Rutles tribute bands around the world. "It should be a verb." He talked about the Bonzo days and got the crowd enthusiastically providing the "band shouts" for some of the old 78s songs that Band loved to resurrect. While most of the songs veered toward amusement, everything from his work with the Pythons to a clever song about the web 2.0 life, he also took time to sing a more thoughtful song about losing friends. 65! Hard to believe. He finished up with a song in praise of his age and left us all with a lot of smiles.

Saturday was a little more sombre as we said good-bye to Kathy Clegg. Funerals, like weddings, can bring out family tensions, but the event brought out a lot of wonderful memories of Kathy's warmth and hospitality -- she did love to have a houseful of people. There was a big crowd of people gathered to remember her fondly.
Posted by C. Margery Kempe at 16:35

Sad echo of the sober bit of the concert. I must admit I envy you your longish but reasonable driving proximity to...Boston?...given a certain comedy festival coming up, among other reasons.

Sorry for your friend and for her family and friends.

Ah...Northhampton. Not all the way across the state. I might drive that far to catch Innes, as well. Definitely a guy who's done great work and with so many other great people.

It's a bit over an hour to NoHo, quite doable. Boston is three hours which is possible but unpleasant in a single day.

Innes is quite amazing; he talked about running into the Beatles at Abbey Road when the Bonzos found themselves recording there. He did a wonderful version of "I Want to Tell You" that really made me happy.