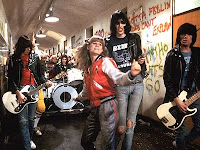 My latest column for BitchBuzz gathers up some suggestions for girl group films. They were on my mind because I'm eagerly awaiting the seemingly endlessly delayed opening of The Runaways tomorrow:

If you're still waiting for The Runaways to come along to your neighbourhood and rock your world, there are a few other films you can see in the meantime to keep those girl group jones at bay.

It's got the Ramones! P. J. Soles! A best friend named Kate (okay, that may only matter to some of us), one Van Patten, CLINT, and of course the amazing underground film stars Mary Woronov and Paul Bartell. Oh sure, it's a Roger Corman cheapie and sure, the Ramones can't act or read lines, but come on! P.J. is Riff Randall, rock-n-roller, a budding songwriter who knows she can be a success if she can just get her songs to the Ramones -- and as long as she can circumvent the evil principal Miss Togar and her Hall Monitor goons.

Her pal is in love with the dishy but dull football captain and the soundtrack kicks out all the jams. It's a hoot and holler and a half and hey, who didn't dream of blowing up their high school (um, back in the days when that was just an innocent daydream, I mean -- sigh)...

As always, read the rest at BBHQ to see what other films you might enjoy.

Sad to hear today that Malcolm McLaren died. While always a controversial figure and something of a Svengali for sure, he was a visionary who left his mark on the world of punk along with Vivenne Westwood. Fittingly I was listening to the Punk Rock Jukebox on WCNI at the time and gave Marko a call to pass along the news.

I'm keeping busy trying to catch up with all the emails etc. that piled up while I was gone, filling out an application for a residency, sending off my bib-bio for Readercon and of course, writing, writing, writing.
Posted by C. Margery Kempe at 16:40

Weirdly, McLaren also left a lasting impact on hip-hop with his Duck Rock album. That's spoken of a lot less than the punk-rock thing for various reasons.

Good point! Yeah, I think being unafraid to fail is an important part of success. Try things -- maybe they work, maybe they don't. Just be wild.

McLaren, who also gets point for the New Romantic movement such as it was (a progenitor for much of the dance music to come) was a mixe bag, though, and hasn't been too active lately (cancer can do that to one), but gosh the ferment he was a part of would be enough, I think. Both he and Wilma Mankiller, felled by chronic illness at 64, when Paul McCartney wondered if we'd still be loved.

Thanks for the reference in the BB article...

Must see BROKEN GLASS sometime, to see if it's relevant here among other reasons. Have seen the Ebert/Meyers BENEATH THE VALLEY OF THE DOLLS finally, thanks to IFC (if thanks are what are deserved), and that "girl" band movie can be safely left off the list. I have a tape of SATISFACTION, but haven't taken the time to look at it over the last year since yanking it out of the TLA discard bin.

Well, the controversy continues even after his death, so I'm sure he'd be pleased. His palette was people and I'm sure many of them objected to the way he applied them.

BROKEN GLASS -- well, it all depends on how you feel about Hazel. Have you seen Jarman's JUBILEE? Another fascinating artifact of the time. BTVOTD is a camp classic -- wow, it really is just terrible, but a lot of fun, too. SATISFACTION: I generally try to avoid any film that has Julia Roberts in it.