No More Pi for Me

As expected the reading this morning was poorly attended, which is to say no one at all showed up for what's traditionally known as the "hangover" time slot. Not too surprising, given that even GoH Cory Doctorow's reading was not that well attended. I don't get it -- I love readings. You can bet I won't be volunteering for another anytime soon (only takes three or four or a dozen times for me to learn a lesson). Doctorow's story was a hoot, "To Go Boldly" which was written for an anthology of space operas, which is not a genre he usually writes. It seemed to take the audience a while to catch on to the humor, but once they did, they kept laughing all the way through. Later in the GoH interview he mentioned being proud of being "an inch deep and ten miles wide," saying the one time he agreed with Heinlein was when he said, "Specialization is for insects" (tell that to our education system).

He said he often puts up works in progress as podcasts and that reminded me that I need to finally get around to the promised podcasts of my stories. I figure I will start small with flash fiction rather than the grandiose plans I had before. This way things that are out making the rounds of rejections can be "available" -- but not technically in print -- to those all important five fans of mine who want to hear me read my stories (but are in far flung, disparate locations). 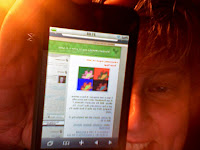 The rest of the day was fine -- I offered my two cents on the new and old Doctor Who and chaired the panel on Torchwood with all the arrogance and fetching bonhomie of Captain Jack, then watched the mysterious Ironman/Batman debate (which Gene can tell you about as he was head of the Batman team). We swung home by way of Northampton to have Thai for a late lunch and (of course) stop by Raven Books. I bought one little book, aren't you proud?

Classes start tomorrow bright and early at 9am. I will have to stop playing with my Oblique Strategies widget and get some things done tonight. Last day of freedom, sigh.
Posted by C. Margery Kempe at 18:13

I'm trying! I have a lot of books to get rid of, too. See how good I'm being? More to go, slimming down in all belongings. Unload, unload. Stuff for you mebbe ;-)

I bet you even bought a book you didn't already own!
No such luck on my part last time I went to Raven Books - d'oh!

If I could ever convince myself to get around to data entry, I would avoid that habit, but I don't think that's going to happen in this lifetime.