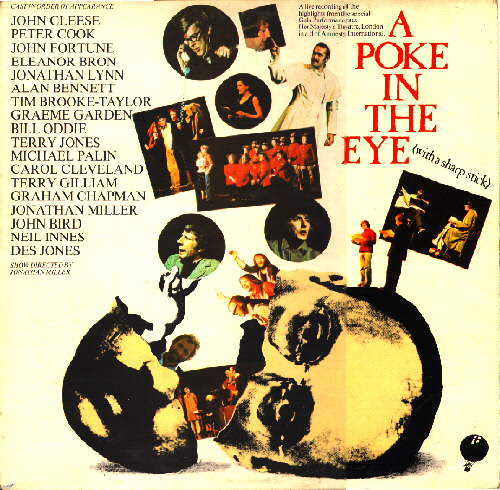 It's the penultimate day of the "working week" and it's raining. Not ideal for moving, of course, particularly because a large part of what needs to be moved is art. Plus, the cable guy (or gal) is coming today to finally hook up the internet at the aerie, which will make life more convenient. I keep imagining bills I have forgotten to pay.

I seem to recall that I first learned the word "penultimate" as a wee teen (pre-teen?) from the "Last Supper" routine recorded on A Poke in the Eye (with a sharp stick), the LP of the first Amnesty benefit, directed by Jonathan Miller and starring Peter Cook, the Pythons, the Goodies, Neil Innes, the fabulous Eleanor Bron, and more (but not Pirate "Bob", alas). It's a bit irritating that the film version, Pleasure at Her Majesty's, cuts some of the bits (gaah, how can you cut Peter Cook?!) but is still wonderful. The bit in question has to do with a conversation between Michelangelo and the pope about this painting he's done of the Last Supper: the pope has a few objections. While Jonathan Lynn plays the painter to Cleese's pope in that version, on YouTube I found this other version with Ade Edmonson playing Michelangelo: enjoy.

Oh, and the reason the word was on my mind: I'm into what I thought would be the penultimate chapter of the novel I've been writing for the last year (although now I think it will be hard to wrap up in the next chapter). If this is news to you, don't worry -- I haven't been talking about it. It's a weird feeling -- while a year may seem like a long time, it's relatively short for me to write a book (as some of you foot-tapping folks have let me know). Being near the end is both frightening and exhilarating.

And yes, Unikirja will be done this summer too. Really!
Posted by C. Margery Kempe at 09:32

I made the mistake of using the word "antepenultimate" in a report at a Faculty Meeting this year. Seeing the confusion in my (college-wide, not departmental)colleagues' eyes, I glossed it as follows: "That's what you get when you ask a classicist to define third-to-last."

I weep for my generation.

I weep for classicists! Ha ha -- just kidding. I weep for joy that the cable modem is working in the aerie!

I try to avoid challenging words and concepts at most faculty meetings. It's just too much work to explain everything. Then again, I have been known to lie about the meanings of words ("no, aeglaca is always a good thing...").