Today is the first day of the rest of the month, and for us it's the beginning of the hideous process known as moving. This is one of the shorter moves we've had in recent years, so I ought not to complain, but it's still a painful process best avoided by putting my fingers in my ears and repeating LALALALA anytime it's mentioned.

Which of course makes me wish I were still in London and pine for that extra week I thought I might have (until I checked on the actual cost of changing the ticket). Instead I will recall the fun I did have: Friday and Saturday with the Brookses, my home away from home (and the very finest graphic design in London!). Thank you so much for always having room for one more. Sunday I saw Stewart Lee at the Tate Modern (which has quickly become my favorite museum in London and that's saying something) then headed out to Great Dunmow for dinner with James and Joanne (thanks!), taking a late train back to London as I needed to meet with the students Monday morning. 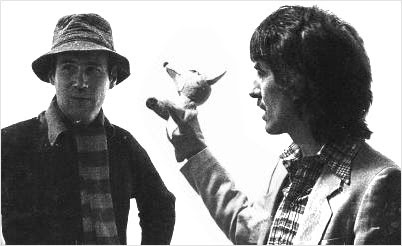 It was your usual bank holiday Monday, which means it was pouring all day. I had my full count of 9 students after their weekend travels, so I didn't mind. We made a quick stop at the British Museum, where it was discovered that not all the medieval exhibits were closed, just the stairs leading to them, so two students gave their presentations before we were off to the National Gallery's medieval paintings. I gave the students their assignment, then slipped off to the Modern again because I had a chance to see Neil Innes talk about Claes Oldenburg and the Bonzos. I even worked up the moxie to go talk to him and say how I had seen him on my first visit to Britain in 1980 at a Save the Whales concert -- and yes, I got his autograph and shook his hand (which gets me as close to George Harrison as I'll get I guess). He was fun and funny, and swore us all in as Egowarriors. I am eternally grateful to Mr. Hamilton for tipping me off to this event (and the Stewart Lee one). It was all part of the Long Weekend, which highlighted a lot of fun and Flux. Brilliant!

I was pleased to discover that my words are in the Tate -- true, they're not credited to me and they're only in the gift shop (on the back cover of the second Moomin book, my review from Finlandia Weekly), but one must clutch at straws where they fly. Gosh has the two books in their display window, which was a pleasing sight as well, since most days required walking past the shop.

Tuesday was the Globe and a lively production of A Midsummer Night's Dream, which seemed to convince the students that this Shakespeare guy has something to offer. Wednesday was the Revenger's Tragedy at the National -- blood, sex and violence in equal parts. Middleton was no Shakespeare, but what he lacked in poetry he made up in guts (both senses). Thursday, the last day to enjoy London and we tried to cram in as much as possible and make the day last as long as possible and taste as sweet as could be. How could it not succeed? The sweetness lasted at least as far as Heathrow -- the students all seemed enthusiastic if a little wistful. I hope they will be beginning new travels soon.
Posted by C. Margery Kempe at 16:25