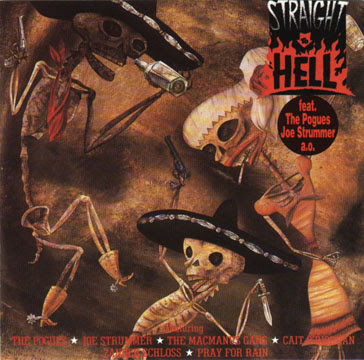 In interviews for the new sequel to Repo Man which will come out in comics form, Cox mentions having almost all his screenplays on line, including the never-filmed Keith Moon story and his Doctor Strange film with Stan Lee. Lots of scripts contain bonus information, like the script for Straight to Hell (one of my all time favorite films, a reminder perhaps that "favorite" is a often bit different from "best"):

Dick Rude and I wrote this at the Kensington Hotel, Santa Monica, CA, in four days. It was based on a Spaghetti Western we both admired, DJANGO KILL (SE SEI VIVO, SPARA), directed by Giulio Questi in 1967. All the characters were written for specific actors or musicians; the film had no casting director.

Also known as THE LEGEND OF PADDY GARCIA.

66pp, followed by long letter from Joe Strummer (written on one continuous piece of paper), detailing his doubts about the film and his proposal for re-shooting and restructuring it; the lyrics for his song "Dogtown," penned by Joe, and six snapshots of the film's protagonists - Joe, Courtney, Jennifer, Elvis, Cait, Sara. Happy days!
Posted by C. Margery Kempe at 11:42

Good stuff! Wish that the Fear & Loathing script was there, so I could determine who's telling the truth out of Cox (who says Gilliam used his script) and Gilliam (who says he threw it away and wrote a new one from scratch).

I suspect the WGA rules on credit offer the most likely answer -- that enough of the original script remained despite being "thrown out." But yeah, wish it were there to see.