This other Eden, demi-paradise,
This fortress built by Nature for herself
Against infection and the hand of war,
This happy breed of men, this little world,
This precious stone set in the silver sea... 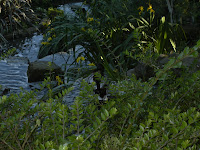 Sometimes in the midst of the pullulating streets of London, it's hard to see what Shakespeare was getting at -- and then you step into one of the beautiful parks, and it all comes back. There is a love of gardens in England that few countries share (Japan springs to mind). The protection of public greenery is something we have not been treasuring in this country. 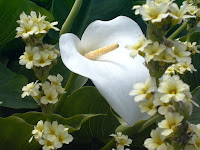 Even in the midst of winter, green can be found in the gardens of London. How glorious it is, though, to be back in summer when -- yes -- the calla lillies in Regents Park are in bloom in the Secret Garden and for a moment, anyway, one can feel the noise of the city drop away and the calls of myriad birds fill the air. 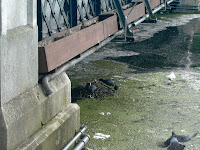 Look under the bridge and you'll find a nest of coots, the adults pampering their single chick. Egrets, ducks, geese and swans crowd the banks, eager for a handout from the passing tourists and bird fans. The banks were covered with pollen thick as snow. 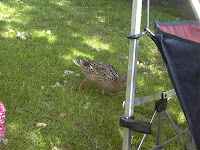 On this trip I finally got to Kew Gardens with Liz and Sophie. We made a stop at M&S to pick up a picnic lunch, then settled on a bench to enjoy it. Far away we could see a duck walking with purpose (what duck would not walk with a purpose when it can?), making a bee line (duck line?) right for us. Clearly she had a plan. It paid off as we were quickly persuaded to share some of our lunch with her. She demanded no less. 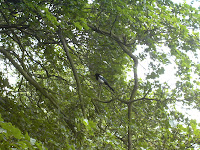 Less demanding were the magpies, who seemed to think waiting was best, certain that we'd leave enough behind for them to snack on. One of them couldn't resist posing just so she was framed by the branches. We also saw guinea fowl, peacocks (who chased the tour tram), larks, a robin in the palm house and many more. 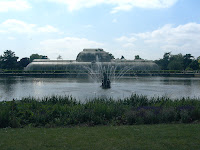 Of course you can't visit Kew without an iconic picture of the Palm House and the pond before it. In the Palm House itself we saw bamboo and bananas and in the basement all the fish -- sea horses and crabs, clown fish and mime fish (well, they looked like clown fish but they were black and white) and all manner of strange little fishies. In the Princess of Wales Conservatory there were additional climates from the alpine to the tropical. And in the Waterlily House there were giGANtic lilies, the size of small boats (Victoria cruziana). 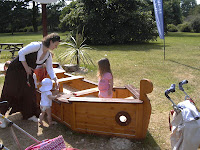 There's even Kew Beach -- where this jaunty pirate ship can be found (see Sophie in her Hello Kitty t-shirt -- gee, wonder where she got that?) along with lots of white sand and plenty of beach toys. The kids have a great time playing in the sand and the adults get to rest a minute from walking the 300 acres of Kew.