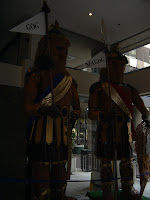 Gog and Magog, the guardians of London, currently posted in the lobby of the Royal National. Pity they weren't watching over the students' belongings a little more closely. 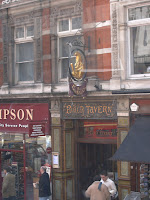 The Punch Tavern on Fleet Street in The City, glimpsed through the window of the Hop-on Hop-off Coach. Unlike the students who got bad sunburns, I stayed on the lower level -- on the boat tour, too, where everyone fell asleep. No Cutty Sark to see anyway. I'll have to find this pub again and have a drink there. Cheers, Mr. Punch. 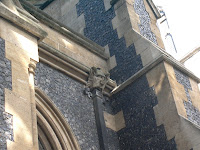 A grim face from Southwark Cathedral. This is where Shakespeare worshipped and a monument to him can be found inside, including stained glass depictions of many famous scenes from his plays. Gower is buried inside as well, claimed as "England's first poet" -- I think contemporary Chaucer might dispute that (not to mention Cynewulf, the Rood poet and of course the Beowulf poet...) 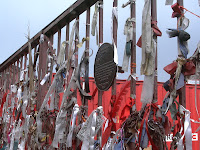 The gates of Crossbones Graveyard, recently rediscovered. Some of the bodies buried here can now be found in the Museum of London. 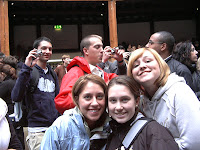 The students mug at the Globe. Despite the three hours of standing, they really seemed to enjoy the experience -- why not? Tim McInnerny played Iago! 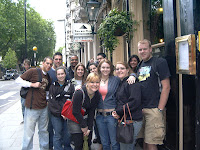 The students are smiling: the trip is almost over and I am buying a round at the Museum Tavern to celebrate the end of the presentations.
Posted by C. Margery Kempe at 10:10

Email ThisBlogThis!Share to TwitterShare to FacebookShare to Pinterest
Labels: travel

Thanks for the GRIM FACE :)

I actually took the time to read about Gog and Magog...I always wondered about them and finally learned their story.