Just found out over the weekend that my paper on the Grendel opera has been accepted for the 22nd Annual Conference on Medievalism. I was hoping to go anyway, but funding is more likely when giving a paper, so this helps. Of course, now there's the whole writing of the paper that has to happen.

I'm also going to be writing a paper on Terry Gilliam's Tideland (which I recently reviewed for Phil's Up Against the Wall magazine) for Steffen Hantke's collection American Horror Film Today. You may recall that name from the collection Horror Film: Creating and Marketing Fear, for which I wrote on the Horror in Film and Literature internet group that I've been part of for -- eek! -- about twelve years. Of course we'll have to see if Steffen still buys my argument about Tideland being horror when I finish writing the essay... 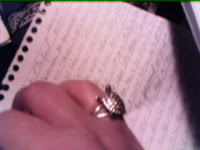 Yesterday we went up to the antique sale/flea market in Round Lake. There were a whole lot of vendors there, with everything from the horrid to the sublime (and the expensive to the affordable). If we had deep pockets and room for furniture, what a place to shop. Gene found some useful things for the book project he's working on and we found a few gifts for friends. I even found one or two things for me -- including a very cool sterling silver turtle ring. Unique -- the head, legs and tail all move!

I am being more productive of late, but there's still a little residual vacation-head that makes me off in another world at times (like that's unusual).
Posted by C. Margery Kempe at 11:48

Oh, and I just got a congrats letter from the VP for my reappointment to "Years Five and Six" at Saint Rose -- nah, that's not a typo. I got credit for my time at UHD, so I'm considered to be starting Year Four this fall on the road toward tenure (no, I'm not sure why the letter refers to Five and Six). So my letter of support from the department served as my Years One and Three reviews. Makes things a little easier and the time shorter. There's a whole lot less paperwork than there was at UHD. Hooray!

That is WONDERFUL!
You are really moving up in the academic world.
Congratulations!

Thanks, Cranky! It's a slow process, but what isn't? Even better, I finally got my second book shelf for my office and I'm finally unpacking the rest of my books -- no more hunting through boxes to find the texts I need. Argh, already found two books I was looking for in the spring (what was Chaucer doing in that box of Icelandic books?!).