"I'm not quite as cool or forgiving as I sound..."

I'll have some lovely photos from the trip to Connemara up soon, but there's something else I need to deal with first. This week has been a head shaking one in several ways that's ended up leaving me with a couple fewer publications than I had before.

However, before I get to that, a digression. Those of you who have experienced me teaching know my proclivity for doing that. I blame Beowulf: chock full of digressions. Like that great poem, however, my digressions have a point. Think of it as a parable and then a lesson if you like.

The other day on Facebook I shared Jim Jarmusch's quote that I love and have used before. It came in a nice graphic form, so I'll share it here, too. 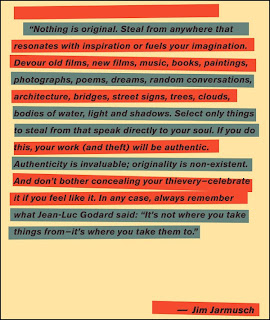 I always say that becoming a medievalist saved me from the terror of "originality" -- because there's nothing like studying a thousand years of literature to show you without a doubt that every story has been told before. My creative writing students who find this revelation deflating I give the reassurance, "But no one has told your version." If I'd been paying more attention, I would have learned the lesson from Shakespeare. The bard's stories are not "original" -- looted from various sources from Ovid to histories to contemporary events. Yet no one told the tales as he did; that's why we still read him with such pleasure.

We need to recognize that we stand on the shoulders of giants; pretending that you have no influences is simply ignorance. The arrogance of believing that you can create anything without those myriad voices in your head, sights in your eyes, sounds in your ears, shapes in your hands is an illusion. The "stealing" Jarmusch refers to here is not a mindless copying of another's work but an appropriation of elements that resonate through your soul. Because once you've placed your stolen object in a new location, it transforms.

Bob Dylan is a master of this. Love and Theft offers a lot of "thefts" -- something Dylan's always been conscious of doing. His title comes from Eric Lott's book Love & Theft: Blackface Minstrelsy and the American Working Class. The album features what Greg Kot in the Chicago Tribune described as:

"The kind of twisted, instantly memorable characters one meets in John Ford's westerns, Jack Kerouac's road novels, but, most of all, in the blues and country songs of the 1920s, '30s and '40s. This is a tour of American music—jump blues, slow blues, rockabilly, Tin Pan Alley ballads, country swing—that evokes the sprawl, fatalism and subversive humor of Dylan's sacred text, Harry Smith's Anthology of American Folk Music, the pre-rock voicings of Hank Williams, Charley Patton and Johnnie Ray, among others, and the ultradry humor of Groucho Marx."

A fine list of looted treasures. What makes his work a success is not who he steals from, but what he does with the stolen goods. In my own small way, I've stolen from Dylan, too. My story "Tangled Up in Some Sort of Cerulean Hue" took Dylan's "Tangled Up in Blue" and mashed it up with Christopher Marlowe's Doctor Faustus and then just played around. My forthcoming novel Owl Stretching stole  its sadly funny tone from Kurt Vonnegut and stole as well as from William Blake (for all the quotes Ro gets wrong)  and The Descent of Inanna. I steal from everywhere; things collide in my head that would not collide the same way in anyone else's head. I run with those collisions and make something the original creators never intended and would not recognise. That's what Jarmusch means.

Witless theft, on the other hand, stealing without respect or transformation, is a crime not only in the legal sense, but to the spirit of creativity as well. Stealing someone else's work and passing it off as your own, you commit a shabby crime and a lazy one as well. In the digital realm, it's also easy to uncover. I've removed my two stories from Trestle Press for this kind of theft: cover art images, not words this time. I first got a tip off from Mr B and he has already found a new home for the Drunk on the Moon stories (well done!). I don't know what I'll do with "Mandrake and Magpies" yet. I'll think of something.

You can read other authors' (more timely) accounts of the revelations and fallout like Julia Madeleine's, Luca Veste's and BR Statetham's and they'll lead you to many more. I feel bad for the first time writers who received a painful lesson in the crazy world of publishing. After you've been through the folding magazine phenomenon and fly-by-night publishers you find it easier to shrug off the inevitable Dickensian Grubb Street betrayal. Swearing a lot helps at first, but then you just get back to writing -- it's what you need to do.
Posted by K. A. Laity at 14:35

Cot is also cohost of a weekly radio show (which tends to drive me up a wall...this is the series where their idea of eulogizing Miriam Makeba was to mispronounce her name repeatedly and get essentially all the facts of her life wrong).

Sorry to read of the perfidy...shall have to look at it in greater detail when I can take the necessary time.

Or even Kot. Turnabout, if unintentional, I guess.

Heh, I'm sure there was nothing subconscious there. I know nowt about Kot, just swiped the quote from Wikipedia for convenience's sake.