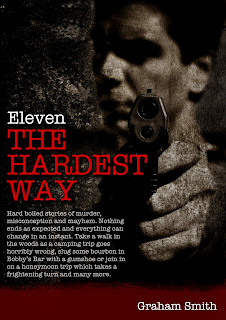 Graham Smith is married with a young son. A time served joiner he has built bridges, houses, dug drains and slated roofs to make ends meet. For the last eleven years he has been manager of a busy hotel and wedding venue near Gretna Green, Scotland. An avid fan of crime fiction since being given one of Enid Blyton's Famous Five books at the age of eight, he has also been a regular reviewer for the well respected review site Crimesquad.com for over two years. As well as reviewing for Crimesquad.com Graham has also interviewed such stellar names as David Baldacci, Dennis Lehane, Lee Child, Matt Hilton, current CWA Chair Peter James, Mark Billingham and many others. When not working, his time is spent reading, writing and playing games with his son. He enjoys socialising and spending time with friends and family.

Q: What do you write on? Computer, pad o' paper, battered Underwood? Give us a vivid picture.

I write on a laptop while sitting on the couch in our living room. There’s usually a dog at my feet and the TV or radio playing quietly in the background. There’s nothing exciting or sexy about my writing space. It’s just normal.

Q: Do you listen to music while you write? Does it influence what you write?

As the first question I have the radio on through the day and the TV at night. I get bashed on better with background noise although when I get going it just become white noise for me. My musical tastes are rock and heavy metal so if I wrote while listening to that all I would write would be car chases, explosions and gunfights with perhaps a spot of unrequited love if a ballad came on.

Q: Do you write in short bursts or carve out long periods of time to work? Is it a habit or a vice?

Writing comes in bursts for me and I’ve not written much lately as I’ve been very busy promoting my two E-books. I work full time in a very demanding job and with the reviewing and family life I find that most of my writing is done late at night or when I’m off work and my son is at school.

Q: What writer would you most want to read your work? What would you want to hear them say?

As I love a good twist in a book and love to include twists in my own tales I would have to choose the modern master of twists Jeffrey Deaver. I’ve met him and interviewed him for www.crimesquad.com and he is a very nice guy. For him to say “cool twist” would be fantastic for me. I actually had this comment from Joseph Finder on a short piece I wrote in a writing class he conducted at Harrogate Crime Writing Festival. To say I was thrilled would be an understatement.

Q: On the days where the writing doesn't go so well, what other art or career do you fantasize about pursuing instead?

I read crime fiction and I currently have a to read pile that is threatening to engulf a whole room. My reviewing keeps me furnished with a constant stream of great books and I have at the last time of counting fifteen books specifically awaiting my humble opinion. I don’t get to re-read these days but I have re-read all the Alistair Maclean, Ian Fleming, Dick Francis and of course Lord of the Rings books many times.

Q: Where did the idea for Harry Charters come from? Do you have a surefire way of sparking inspiration?

I was invited by Kate Pilarcik to write a noir piece and that’s where Harry Charters came from. I take my inspiration from all kinds of places but especially jokes as I like to dismantle the punchline before rebuilding it as a twist. Once I know the twist at the end then the rest of the story tends to fall into place. How I get there is a surprise for me as well as my readers. 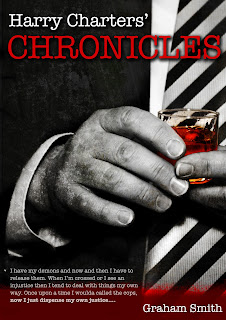 Join gumshoe detective Harry Charters as he tries to escape his demons with a shot of bourbon and a mystery chaser. His investigations include a rigged poker game, a missing teenager and tales of domestic strife. He also gets himself into the middle of gangland power struggles and comes head to head with a crime family who run an entire town.


Harry Charters is not the kinda guy who calls the cops. Instead he dispenses his own brutal justice as he rights wrongs and settles balances. Will he come out on top or will the bottle get the better of him? Read Harry Charters Chronicles to find out.

Find Graham on Facebook and Twitter, as well as on Goodreads and Amazon.Be sure to check his reviews on CrimeSquad. Harry Charters' Chronicles and Eleven the Hardest Way both available on Amazon now!
Posted by K. A. Laity at 07:00

Yikes ... I just trailed you into a psychedelic 60's scene, Graham man. Good thing Uncle Harry gave me that shoulder signal when you and the Lady Laity turned down that crooked sidestreet.

Just kiddin' Ms Laity, but that is a real shag rug, right? Is there a disco ball 'round here too? Ok, ok I'm sorry - I came in to fill in that last piece of the clue puzzle ... but hey -- keep it right here will ya -- Graham and Harry Charters got a rep to provoke. Ya see, when we started up *THE SHADOWS OF NOIR* over AT THE BIJOU (now running into its 4th month), good ol' Graham was our first 'rookie' up to the plate after gritty streets author Kevin Michaels helped me kick the whole shebang off. Well, son-of-a-gun, this superb friend to authors, authors everywhere, was almost shyin' away -- Yep, you heard me right. Lotta canaries down da docks heard it too -- but he kept his cool and just stage whispered that he ain't never done no Noir, no how, no way before.

I upped and believed in the guy and man oh man once the Graham man puts his noggin into noiring ... he gets so hepped up in his hype ... Sent me one, sent me two, sent me three in-character pieces of his new character. Thing is - the tough as nails with a tender caramel center (shhhh) had no name. I was adjusting spots and kleigs and pushed it right back before he climbed on stage, guffawing good heartedly at his lovealbe shim sham of "just keeping the mystique up about a major protagonistst." I tell ya, I told him his dick needed a name.

That's history.
Harry Charters winked at me and we *clinked* scotches neat later on at a little dive we both knew.

We both always got our eye on the Graham guy. Past teeming talents, the son of a gun tries and gives and damn it, lady Laity -- there ain't nuttin' like an author takin' another author all the higher. Col Bury, Matt Hilton, Lily Childs, David Barber, dazzlin' Daz -- they all gots the wherewithal to push positives. Folks I never hear sniper down another author are the ones I do my doggonedest in this here world to take the higher.

You got a good guy here and Harry Charters just slipped me a folded up note so I'm outta here. Places to go, promises to keep. You know the score.

But that dick's got a name and that'll be just one o'the Graham man's claims to fame. When I cross the pond, I'm headin' up to Greta Green.

Now where do I get my complimentary mood rings -- on the way out?

Oh Kate, you are ABSOLUTELY the champion of the emergers, the princess of prose and the gal behind the wheel who's drivin' us all forward to better things.

You say you hide behind the spotlight making us shine yet your presence shines brighter than any spot.

Open the door and come on in. There's whiskey galore.

Whiskey? Whisky you say? A belt with you and the perpicacious Lady Laity would suit me right fine.

Mmmmm whisky, I hope. Any port in a storm but definitely Scorch over the Irish, much as I love being in the Emerald Isle.

Nice one Graham... I love seeing you pop up all over..xx