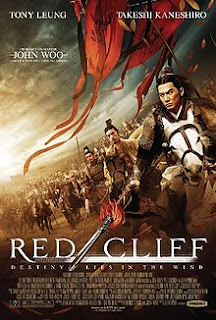 O for a muse of fire that would ascend / the highest brightest heaven of invention / a kingdom for a stage, princes to act / and monarchs to behold the swelling scene...

There aren't many pieces I can quote from memory (I gave the habit of misremembering every quote to my main character Ro in Owl Stetching; trust nothing she says!), but this is one. Yes, I just double-checked it. Okay, one word off. That's rather good for me.

Anyway, surely this is the emotion swelling in John Woo's bosom that urged him to make this epic battle film. Or this half of it, anyway. The three hour film I saw, Cultural Gutter tells me, is only the condensed version of the complete five hour movei. Wow. Epic indeed.

The narrative follows an historical battle, no surprise. For the man made famous by a film with the tag line, "Two men. Ten Thousand Bullets." Woo has stepped up the munitions even more here: let's say a million billion arrows, lances and swords. And that's not even mentioning the fire bombs.

I had my doubts when the film began with an awful American voice over: fortunately it disappears too quickly. Once again Hollywood assumes people are too stupid to just pick things up from the narrative. Woo actually does the zoom-in and highlight with title card when we first meet the key players.

At the center, the always patient world-weariness of Tony Leung as Zhou Yu, who would rather there were no more wars, an opinion shared by his impossibly radiant and artistic wife, Xiao Ciao (Lin Chi-ling) but they're both mindful of the greater good. Zhang Fengyi gives the power-hungry Cao Cao a realism despite his embodiment of the arrogant man of power. Zhao Wei gives a plucky performance as the cross-dressing Sun Shangxiang -- they actually make her look androgynous enough in costume to be somewhat believable. You never for a minute believe anyone could mistake Brigitte Lin for a man ("But she's wearing a man's hat!"). The young but clever strategist Zhuge Liang (Takeshi Kaneshiro) comes up with some of the most bizarre and yet effective plans that often seem divinely inspired -- or at least inventively creative.

There's a great cast and all kinds of pyrotechnics, flying arrows and spurting blood. There's nothing you haven't seen before if you've watched a lot of wu xia, but it's an enjoyable epic that hits all the high points and feels satisfying if you've got nowhere to go for a few hours. Here's the trailer, so you can see it is chock full of stunning visuals (and yes, a patented Woo dove -- and yes (>_<) Don LaFontaine doing the voiceover).

I like nearly all these folks (very easy to watch Zhao Wei for me), and yet this film had gotten right past me. Shall seek it out in my slow but eventual way...

I can't believe I missed it either -- there must be a reason for that. But it was certainly fun.