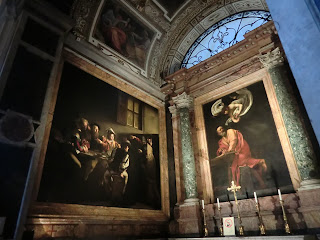 First off I have to say this is Alessandra's photo. I tried to get the pictures off the camera and onto my travel computer only to find that it overloaded the memory and now I can't upload them to the web. Argh. So kind thanks to Alessandra and she's started writing a blog, so you should check it out :-)

On the second day, we wandered down to the Jewish Ghetto area where the Theatre of Marcellus can be found as well as the fabulous restaurants with giant displays of artichokes. The roasted artichoke we had with lunch was so good! I can still taste it, mmm. All the food was good, but I have generally thought of artichokes as far too much work to be worth it, but this inspired me to make one when I got home. Nowhere as good, but still tasty. My favourite fountain, the tortoise one, is near here in Piazza Mattei (and apparently Bernini added the tortoises!).

The amazing thing about the Caravaggios in Rome is that so many of them are where they were intended to be: in churches. Small churches -- dark chapels in the small churches! The Basilica di Sant'Agostino and the Church of San Luigi dei Francesi that day. When you walk in the church you can always tell where the Caravaggios are because there's a knot of people all staring up. To light up the space there's usually a little box for you to throw your euros in and then the light comes back, so it's a amusing to watch the mini-drama each time the light goes out. Who will be the first to put a coin in the box?

What can I say about the paintings? To see Caravaggios where they were meant to be, to contemplate them in baroque churches that were chock full of gold and art and massive pillars and ornamentation? I always loved the line in Brideshead where Charles talks about being "insular and medieval" in his tastes and how Italy converted him to the Baroque. I won't say I've been converted, but I was certainly dazzled time and time again. One of the truly spectacular things about seeing Rome with Alessandra is that we could turn any corner and she would say, "oh, there's something you must see here." We would step inside a small stone church and suddenly a Baroque paradise! How were the Caravaggios? Indescribably awe inspiring. You'll just have to go to Rome and see for yourself.

We saw the Pantheon and marveled at how lovely it looks still -- as Michaelangelo said, "the work of angels not men." Then wandered over to the Piazza Navona, once a stadium for sports, home of an amazing Bernini fountain, Fontana dei Quattro Fiumi -- partly inspired by the artist's desire to show his superiority to his rival, Boromini, or so the story goes. The fabulous Palazzo Pamphili overlooks the piazza and it's also home to the Church of Sant'Agnese in Agone. Agnes' chapel was open, so we had the chance to peek at her little skull. Agnes was a popular figure in medieval martyrologies, patron of chastity and gardeners, always pictured with her little lamb. People wanted to touch her and feel some reflected glory -- the way that people want to grasp at celebrities now.
Posted by C. Margery Kempe at 15:43

What a wonderful celebration of the Eternal city!

There will be more to come! Finally getting those pictures up ONE AT A TIME (argh!).