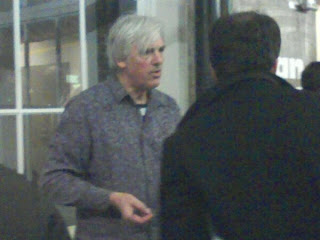 Last night Peg and I headed off in the direction of MassMoCA to catch Robyn Hitchcock and Joe Boyd perform their show Chinese White Bicycles, which links together readings from Boyd's memoir in the music business in the 60s and Hitchcock's performance of the songs from the artists including Dylan, the Incredible String Band, the Move, Fairport Convention and yes, Syd Barrett. Many of you know how much I adore Mr Hitchcock, but I've never had a chance to see him live because he always seems to be touring here when I'm in another country, and touring elsewhere when I come back. So squees a-plenty when I got tickets for this.

We stopped off at the Man of Kent pub for lunch then, on a whim, stopped at the Clark Art Institute where I have never managed to go. We caught the final day of the Dürer exhibit, which was delightful, then explored the rest of the museum which ended up having unexpected delights like Bouguereau's Nymphs and Satyr, Turner's Rockets and Blue Lights (Close at Hand) to Warn Steamboats of Shoal Water, and Monets, Degas and Singer Sargent, including his Fumée d'Ambre Gris.

By the time we got to MassMoCA, the exhibits had closed (I was hoping they'd keep them open a bit later because of the concert), so we wandered around the rolled up sidewalks of North Adams and then tried out the new rib place (good!) before wandering back and taking up our seats. It was not a sold out show, which amazed me, but what do I know.

I know I was grinning like an idiot when they came out, Hitchcock in purple trousers and his purple glasses and one of those wild shirts. From the start, Boyd's low-key delivery of pivotal moments from White Bicycles where his personal history and rock history collided (meeting Dylan at breakfast with a young woman he'd hoped to bed) meshed well with Hitchcock's music, "setting the scene" as he said because like jelly it had to be. Boyd deflated some long-repeated mythologies -- he was there when Dylan went electric and no, Peter Seeger did not have an axe -- and Hitchcock infused familiar songs with renewed meaning. I haven't heard "Masters of War" in so long; it's easy to forget just how powerful it is. "Mr Tambourine Man" was magic and The Move's "I Can Hear the Grass Grow" a delight.  In between typical Hitchcock banter both with the audience and with Boyd: "Interesting is a word with a lot of "i"s in it... okay, it starts off with two, but the more you look at it, it grows extras..."

Boyd had a lot of interesting behind-the-scenes stories, connecting the reborn Fairport Convention to their reawakening at The Band's Music from Big Pink, then relating how the guys from Los Lobos said they would have remained a bad heavy metal band had they not listened to Fairport and turned to their own folk music for inspiration. I don't know the Incredible String Band that well, but I loved Hitchcock's rendition of "Chinese White" and laughed at Boyd's story about how leaving the band alone in New York for three days while he flew out for business in LA ended up leading to their joining Scientology (and perhaps consequently derailing their career).

Boyd had been the owner of the influential UFO club, that really gave the big boost to the then unknown Pink Floyd. If you only know the post-Syd Floyd (as most people seem to do) you're missing out. The genius that was Syd Barrett! Boyd read his encomium to Barrett which appeared in the program for a tribute concert the two worked on. It brought tears to many eyes, including Hitchcock's and then he performed "Bike" which is a just about perfect song, and delighted everyone.

They signed copies of the book afterward, so I actually got extra squee. Joe Boyd liked my Ganesh scarf and I asked Robyn to sign my Moleskine, so now I can take a little inspiration with me everywhere. Happy sigh. Looking forward to reading the book, too! 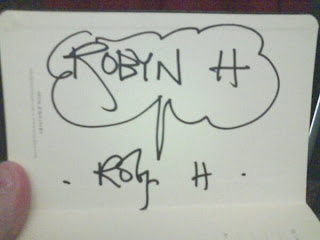 The AboutBl00dyTime Zone gives a thumbsup to a:

Soft Boy
in a Moleskine ;D

@TjZ -- I was going to have him sign the program but then I thought this was much better. :-)

I forgot to mention the stories about Nick Drake and his rendition of "River Man." Lovely lovely.

Boyd these days admits he was kinda a jerk when pushing the post-fatality (pre-Sandy Denny fatality) Fairport around, and well he should. They were great from jump, and only got to be Just Good after all the women left, and then Richard Thompson followed.

This strikes me as Very Overlooked.

He's mad, he says! (Since he does like the ISB and the early Floyd, much much better than the later PF, too.)

And Fairport Convention was almost as cursed as one of my other treasured subjects tomorrow. Fate's a real clown, as Ellison once put it while trying not to bust his typewriter while typing it.

Not really my cuppa, FC. I think I want to know more about ISB though. When there was no Syd (even as an echo, e.g. "Wish You Were Here") they lost something important and unique, and were mostly left with Waters' virulent misogyny.