So, I guess I should mention that I will have a piece in an upcoming gallery show: yes, me. I know, I know: not my usual sort of announcement, but there it is. The show is "Text as Art" and it will open on February 28th at the Arts Center of the Capital Region. Doubtless there will be pictures and what not: I can't wait to see what all will be in the show. My piece is called "The Square Root of I is I" and grew from my recognition of Nabokov's influence on me and trying to make manifest the often invisible effect of those giants on whose shoulders we perch. I found out I had been accepted Sunday at the monthly Poetry & Prose Open Mic that Dan Wilcox and Nancy Klepsch run at the Center, always a great event. I read "Dear Friend" which is always fun. 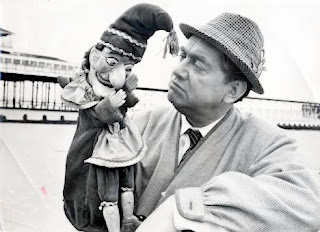 Let me remember to put this first for once: visit Todd's blog for a round up of all the TOFs.

I had meant to write about both The Rebel and The Punch and Judy Man, but I think I'll save the former for a later post. I had not got around to this Tony Hancock film because most people told me it was quite a disappointment and not at all good. While unsuccessful in many ways, there's a lot interesting in the film, too. Not least of which is the cast: regulars from Hancock's Half Hour appear here, including Hattie Jacques, Hugh Lloyd and Mario Fabrizi, plus Sylvia Syms and the incomparable John Le Mesurier, who plays a sand sculptor maintaining a vestige of shabby gentility in a shack by the shore. Hancock is the titular puppeteer, accustomed to the roaming life yet married to the dishy Syms, who wants to better her lot. From the start, there's a mismatch between the characters: it mirrors the mismatch between the aims of the film. It starts out with a kind of gritty, kitchen-sink feel, then careers into farcical comedy, then back again. Hancock's woebegone face seems perfect for a taut examination of the woes of differing marital ambitions, but then we swing out to the matey fun on the shore with all the crazy characters. But there are individual bits of the film that are simply sublime.

The tête-à-tête between Hancock and Le Mesurier in his little shack offers a sweetly sad moment, as you see how the artist's life has been slowly eroded away until he is left with almost nothing, yet he continues to maintain a sense of style and propriety that gives a gentle dignity to his tiny world. Even if you know nothing of the peculiar developments within their relationship, it's easy to see how comfortable the two were with one another in this scene. Hancock can do so much without a word; it's a delight to watch emotions play over his expressive face. When he accidentally bursts into the lingerie shop, the myriad swiftly changing emotions are pure pleasure. I love the elegant evening that devolves into a bun fight, and while many reviewers have focused on the climactic fist fight between Syms' Delia and the cultured Lady Jane as a misogynistic moment, the class elements seem so central I guess I don't read it that way at all. It is about deflating Delia's pretension to social climbing, but it makes the object of her aspirations so unworthy that it doesn't really seem like her failing. She ends up with a black eye, but you have a satisfying feeling that the smug Lady Jane has a bigger one.

Flawed for sure -- it would have been better if they'd gone for the gritty and sad, or else made it a lot more funny, but it's not without its charms and the snapshot of seaside life, a world already eroding in the 1960s, is quite beautiful in its way.
Posted by C. Margery Kempe at 09:05

Congratulations! I look forward to following the links when I have some more time to do so.

Looks like this film holds a place for you not unlike the place that IT'S IN THE BAG holds for me...lots of folks very important to you for their other work, making a film that doesn't quite display them at their best, except in fits and starts, but still eminently rewarding.

That's a good way to put it. I wish Hancock had not so abruptly fired Galton and Simpson, because it would have been wonderful to see what they would have done with this. I can understand wanting to break through to a new level in one's career -- and who knows? With a better writer, this might have been a story on par with Osborne's The Entertainer. So much potential -- but I can't get tired of watching Tony Hancock's face.

LOL -- the Nabakovian vocabulary! I just couldn't wait to work them into a story. Now I bow publicly to the master.

I assume The Rebel you refer to is not the Nick Adams series, but it gives me ideas.

No, it's not, Evan, but anything that brings inspiration is great!