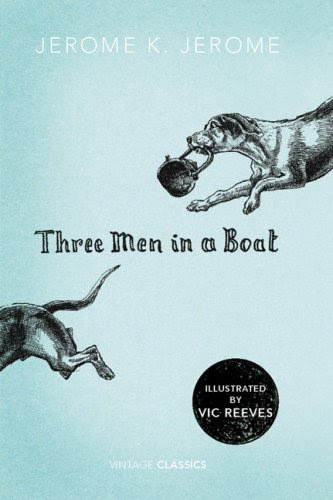 This might be an odd choice for "forgotten": after all it's a classic, at least as acknowledged by humorists. But I find that the "in print" edition listed on Amazon (that gauge of what's available) is actually a CreateSpace edition, though there's a Tor edition from 2001. I am pleased to see that the version illustrated by comedian Vic Reeves has been scheduled for release here in May.

Jerome asserts that the strength of this narrative is its root in the truth. "There were four of us," he begins, "George, and William Samuel Harris and myself, and Montmorency. We were sitting in my room, smoling, and talking about how bad we were -- bad from a medical point of view I mean, of course." After discussing various symptoms and ailments (like the Beowulf poet, Jerome's digressions from the stated purpose prove infinitely entertaining), they hit upon the idea of a a trip up the river as a perfect solution.

It hardly seems the sort of genius stroke it proves to be. The novel follows that meandering path of the Thames with a gentle but persistent humor that sneaks up on the reader. You find yourself laughing out loud at the oddest things. And between the comic moments, Jerome slips in moments of poignancy and even history with painless deftness. Sometimes they all combine at once, as when he describes the effect of a hearty meal on the cranky boaters.


It is very strange, this domination of our intellect by our digestive organs. We cannot work, we cannot think, unless our stomach wills so. It dictates our emotions, our passions. After eggs and bacon, it says: 'Work!' After beefsteak and porter, it says: 'Sleep!' After a cup of tea (two spoonfuls for each cup, and don't let it stand for more than three minutes), it says to the brain: 'Now, rise, and show your strength. Be eloquent, and deep,  and tender; see with a clear eye, into Nature and into life; spread your white wings of quivering thought, and soar, a godlike spirit, over the whirling world beneath you, up through the long lanes of flaming stars to the gates of eternity!'

The book has been a favourite of many. It spawned Connie Willis' To Say Nothing of the Dog (the subtitle of Jerome's tome). Not gut-busting humor, but an inviting story you would be glad to encounter at any time. Like the friend you're glad to see, especially when you don't have time, but gladly neglect your duties to idle away the afternoon. When you find someone who's read it, you need only smile and say "the cheese!" and the two of you will be old friends.

Perhaps the best film version is the one that has a script by Tom Stoppard: Michael Palin has said he counts it among the finest work he has done and remains quite proud of having been in it with Tim Curry (as J) and Stephen Moore (George). Stoppard's script captures the heart of the book, but the biggest laughs end up falling in different places due to the switch from verbal to visual. It only makes sense, after all.

You can find the complete list of FFBs at Patti Abbott's blog.

I have more reviews to write: Fela! the National Theatre broadcast from this week and Mike Leigh's Another Year which I saw yesterday afternoon when I ought to have been working. To say nothing of the hot chocolate I drank while lounging in the café after the film... 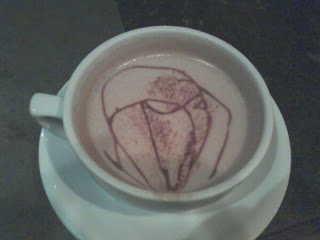 Sometimes, there are more important calls for one's time than work. Consider the source of this statement.

My copies of the Jerome and the Willis are stacked atop each other...rsn...

I read it for the first time a couple of years ago and thought it was smashing.

@Todd -- yes indeed, listen to your own wise words! I have to get the Willis.

@Paul -- when I first picked it up, I thought "well, this isn't really going anywhere..." but it's so brilliantly seductive like an idling conversation in a pub on a warm day, you find you've let the day slip away and have no regrets at all. A delight.

Jerome had a way with horror, as well...

read this...last year? STILL have to watch the PalinCurry viddyvindal00 which is all online, the link that i excitely forwarded

then forgot about ;P

The *poignant parts* didn't quite work for me except for adding to The General MEANDER but i s'pose that's the point. my copy i believe was handed to GK4...

hrm...must meander back to the dayjob

TjZ:
Mubarak FINALLY left the building for g00d?!? :o must. check. other sources!!!

LOL -- what, you don't trust me and Warren Ellis, Joey?

That filmed version is quite lovely and Stoppard's script works around the digressions neatly, for example as we're about to get one, Harris and George shout down J with "Not now, J!"

Talk about cupcakes-there's a place called Sprinkles here in CA where people lineup for a half hour to buy one.
Liked Another Year a lot. Complex look at happiness, wasn't it?

AND bacon strip i nabbed from kitchen here at sk00l!* ;D

bytheby
Spider Jerusalem carries a Bowel Disruptor so i do NOT trust him with eyes wide open! ;D

Right then, so my birth sign breathes easier. anow.

@Patti -- yes on AY: I realised while watching it why I tend not to like mimetic films. They seldom actually feel real. Leigh's films do. The central metaphor of the garden -- absolutely perfect.

@Joey -- you are cruel indeed, taunting me with your cupcakes and bacon. I'd certainly agree re: Egypt and it may well be out of the frying pan into the fire in this case. Spider Jerusalem ain't got nothin' on me.

WHO will star in the Movie for The Week:

[Student evaluation: "i could never sit still during the lecture on BEOWULF due to b0wel. disruption :P"]

Joey, you are so crazy!

Great choice! And thanks for YouTube link. Gonna get me some Palin love for Valentine's Day.

Enjoy! It's such a great little film.