Kit Marlowe makes a visit over at JoJo's Book Corner today where she reads from The Mangrove Legacy and gives away prizes including an exclusive mug! This is all part of the building excitement for Authors After Dark where Kit and I and a whole host of lovely writers will be converging on Philadelphia for various high jinks this August. 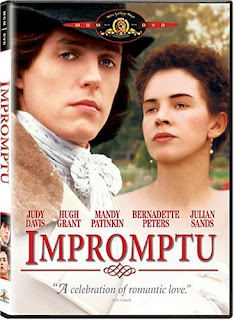 Impromptu is a fave of mine: I've used it in the "Writers in Motion" course which examines films about the writing life and how it gets romanticized. But sometimes you really want that romanticism: if only life were as breezy and entertaining as this film. The dull slog of the writing life wouldn't make for a gripping film, but we do get hints of the work -- and its cost -- here. The iconic iconoclast George Sand, born Amantine Aurore Lucile Dupin and later becoming Baroness Dudevant, here played by the always engaging Judy Davis, struggles with her writing and her relationships. Because the film focuses on her relationship with Chopin (Grant), her trouser-wearing breakthrough and tempestuous relationship with poet Alfred de Musset (played with real brio by Patinkin) are already in the past. A big part of Alfred's contempt has to do with the amount she's able to write, which he dismisses as just "regurgitation" of her life. As someone who's been sneered at for writing "too much" I guess I feel a lot of sympathy for George.

The heart of the movie is the hilarious visit to the country by all the Parisian artists. Emma Thompson shines as the ambitious Duchess D'Antan who, marooned in the provinces, seeks to bring the glitterati to her. Along with Sand and Chopin, she imports painter Eugene Delacroix (played with laconic humor by Ralph Brown) and of course composer Franz Liszt (Julian Sands at his best) and his amour, the disgraced Countess D'Agoult. Peters is just perfect as the unhappy and envious Marie, who seeks to poison everyone else's happiness.

It's not great art, but it's charming fun. There's a little too much of the strong-woman-must-seek-weak-man motif (I'm sure some do, but most strong women I know like strong men), but for the most part Sarah Kernochan's script will keep you amused and make you envy the writer's life. If only!

Hop on over to Todd's blog for the full list!
Posted by C. Margery Kempe at 10:46

Ah...one advantage of BECOMING JANE is the deft nature with which it suggested the drawbacks and frustrations of the writing life, whether for young Austen, or even for the Stephen King of her even more misogynist and classbound time, Ann Radcliffe. But (the oddly unbilled) Emma Thompson would certainly spark my interest among the cast, and the subject has built-in appeal.

Just watch how high y'all stack those jinks...we have union regs, here in Philly.

I'm practicing my jink stack and doubtless it will form the heart of our assault on the city of cheese steaks. I think this was just before Thompson's star began to rise in Hollywood anyway -- she already had had her own series in Britain.

I liked Becoming Jane a lot more than I expected, for just those reasons. The more gloomy Miss Austen Regrets just made her seem joyless and bitter. Bitter I can believe, but not joyless. Much as I love Olivia Williams, it was not very satisfying.

Thanks for the reminder of a personal favorite that I haven't watched since it was first released. The Judy Davis performance sells the movie all by itself; Grant, Patinkin and Peters are just icing on the cake, and I forgot about Emma Thompson entirely!

I have to dispute your characterization of Chopin as "weak," though, even as protrayed in Impromptu. He's physically frail, yes, but a gifted and dedicated composer and a man who can speak to a force of nature like George Sand both politely and firmly. Unassuming maybe, but not weak.

Lynn, you're right: he's show to be physically frail and a few times overtly feminized in a very broad way, but he does indeed make plain his thoughts and opinions. In part I think they overplay the feminized aspects to make the eventual consummation pay off more -- which I don't think is necessary.