I'm the guest today over at Amber Polo's WordShaping blog, talking about why I write in the fantasy genre. Drop by and leave a comment! Amber is a fellow Broad. I always find it interesting the things I figure out when interviewed. A lot of things never get articulated until somebody asks you a few questions. As we all know, I have to be prodded a bit to talk about myself. 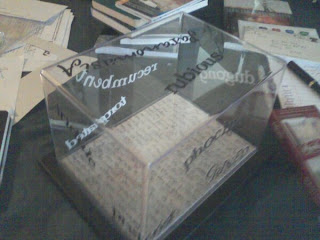 Yesterday I dropped off my mixed-media art piece, "The Square Root of I is I." Here's a little preview of the piece sitting in the midst of clutter on the table before I packed it up to take to the Arts Center. I understand at present the idea is to put it on a pedestal. They're going to be hanging the exhibit tomorrow, I believe. While dropping off the piece I ran into my colleague who's also in the show. He has an installation that will require him to be there for a few hours at a time, being a writer at his desk. I am far too lazy for that kind of thing. I am looking forward to the opening event on the 28th. I will wear my beret so I fit in.

On Thursday -- in addition to a fabulous lunch with Crispinus (thanks for the map of Roma!) -- I headed off to see Rasputina in Hudson. This was my first visit to the newest incarnation of Club Helsinki and I have to say, wow! Swank! We got there early and had a tasty dinner and a front row seat. I was fascinated by Melissa Bell Dawn Miceli's drum kit which incorporated a djembe, tambourine and bells along with the bass drum and tom. She played the whole set with big beaters and gave a unique sound. Founder and guiding spirit Melora Creager introduced each song with her clipped delivery and dry humour. While the idea of a guy playing with the band seemed unthinkable, Daniel DeJesus showed amazing facility and his cello meshed perfectly as a complement to Melora's. It was no surprise to find their new songs like "Snow-Hen of Austerlitz,""Calico Indians" and "A Holocaust of Giants" intrigued with historical references and their signature ethereal sound, though with more of a "tribal" vibe, largely due to the drums and percussion. What really struck me was the covers, because they really highlight the uniqueness of Rasputina's style. Their rendition of "Wish You Were Here" has an amazing quality of longing that's entirely dependent on the warm cello strings. It is impossible to convey the sheer delight in their rocking version of "Barracuda" -- the cellos sounded like hoofbeats. It was amazing! And they out-mooded the Smiths with their rendition of "How Soon Is Now?" A delight through and through.  Voltaire opened the show with his unique brand of gruesome humour. His new turn toward kid's music and country music left a kind of disjointed feel to the set. 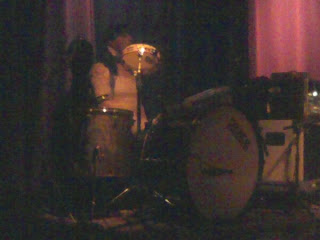 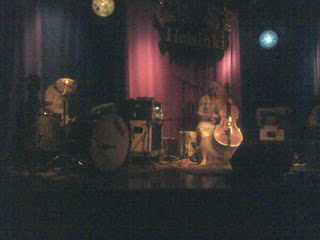 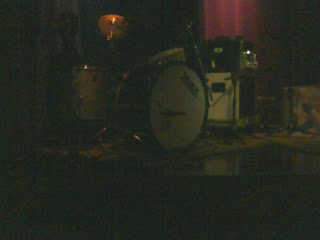 I think it was fate on Friday night: I had an embarrassment of riches offered to me that made it hard to choose between. I was saved the need to choose by unexpectedly having to spend my Friday night in the emergency room at St. Peter's.

I had gone to my doctor with a pain in my leg that's been there all week. Not so bad, but the leg had swelled up Thursday night, so I wanted to be sure it wasn't anything alarming. The doctor thought the same thing, but as it was already late afternoon when I finally got in and no imaging places were open.  The only option left to get an ultrasound was the ER. The folks at at St. Peter's are quite friendly, but they're also very very busy. Of the three hours I spent there, a large part of it was spent sitting on a stretcher in a hallway because there was no room available. I didn't feel too bad when I overheard the nurses talking with a (clearly much loved) doctor who used to work there who was waiting on a room for his wife. If he couldn't get a room, there were no rooms to be had for sure, so I sat on my stretcher and read Trollope on my iTouch. Several people referred to the ultrasound as "the doppler" so I was amused to think they were observing the weather in my leg. Surely something will come of that. In the imaging suite, someone was listening to "Imagine" which seemed apropos. The scan showed nothing alarming, so that was a relief, though it took another half hour or so before the doctor finally told me what the doppler-driver had already told me. So it may just be a bad muscle strain. Wrapping my calf and knee has seemed to alleviate the pain somewhat -- elevating it, too, rather than sitting hour upon hour at the computer :-\ also a good idea. I'll check back with my own doctor tomorrow. It should be fine.
Posted by C. Margery Kempe at 12:01

Oh no! Miss Kate! I hope you are feeling better. I'd say to slow down and stay off your foot, but I know you....Hugs, dear.

Thank you, Miss Wendy. I am trying to slow down a bit and re-think my ergonomic situations, too. My chair at home is a disgrace. I think I will have to break down and get a new one.

The description of my piece (which might help make sense of it):

All writers are dwarfs standing on the shoulders of giants, as Bernard of Chartes declared in the twelfth century, but this piece makes that prism of influence concrete. I make plain one of my influences by covering this acrylic display case with words I have learned from reading Vladimir Nabokov. The transparency of the case allows the viewer to see through to a manuscript page of my story "Wixey" which grew out of a desire to employ the words I had first encountered in the pages of Nabokov's books. The literal shadow
cast on my words by his makes visible the metaphorical shadow cast by Nabokov and all the other writers I have read in my life. The handwritten form of my story pleads for a sense of authenticity, but the printed font of Nabokov's words conveys a counterbalance of authority. The title also comes from Nabokov: the protagonist recognizes within himself the I who lives and I who observes, the eternal mask of the writer.

Meanwhile, I thought I instructed you quite plainly Not to break any legs, in commentary on your last posting...*funking*...but glad most things are turning out OK.

EVERYONE knows that if you're going to have a cellist in your band, he'll have to be male...c'mon, women are good for percussion and fronting, but arco is a manly art. Pizzicato will break your fingernails. QED. (If Bikini Kill could be three women and one man, no band is impossibly XY in part...)

Well, I didn't break the leg after all, so I was not being disobediant.

One of my first crushes (if it can be counted as such) was on my best friend's older brother who played the cello, so I suspect that my be the mostly-forgotten root of my fondness for the cello. Love that deep, warm sound.