NYC on Thursday to see Lynda Barry and Maira Kalman and today I'm off to Connecticut for the final party at the Aloha Alcohula. So, in haste with the hope of more later: 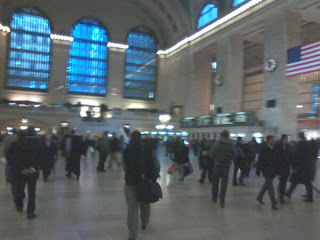 My route: drive down to Poughkeepsie, Metro North to Grand Central, arriving after everyone's already stopped waltzing. Then off to the Met Museum. Many things to see there: the Stieglitz, Steichen and Strand exhibit, especially Stieglitz's photographs of Georgia O'Keefe (even bought the postcard set), loved Katrin Sigurdardottir's installations, and of course, I'm always a sucker for Rothko: 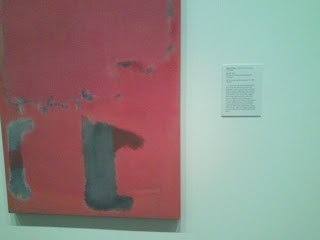 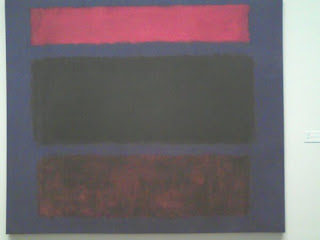 Afterward I had a lovely sushi dinner and then headed over to the 92nd St Y for the talk: Lynda Barry is just so utterly amazing. She said she was really nervous and so what was best was to do something really frightening (though she said it would be even better to eat a hotdog, but --) so she sang a song to the tune of "Coal Miner's Daughter" that explained her family (Norwegian and Filipino) and her difficulties growing up. I can't capture her madcap and inventive conversation. She talked about everything from trying to find tears for great art and instead finding them when she met Jeff Keane of Family Circus, because that comic had given her such hope as a child, a way to imagine a happy family through that little circle. Or her Filipino grandmother who told the most horrifying descriptions of the woman who was really a vampire who took her legs off and crawled across your ceiling and used her long tongue to suck your blood because you leave your clothes on the floor! Her new book Picture This: The Near-Sighted Monkey Book is a companion piece to her incredibly inspiring What it is, but aimed at drawing rather than writing. She describes it as like Highlights but for any age and so if you were stuck in JiffyLube waiting for your car, you could pick it up and be less tense and really enjoy yourself. For her, the power of drawing is plain: after working on Cruddy for ten years on a computer, she was overwhelmed by the awesome power of the Delete Key. Once she started using a brush to write the letters, she finished it in nine months.

Maira Kalman is quite amazing too: though more reserved than Barry, she was equally inspiring and surprising. Her work shows the power of just keeping your eyes and mind open (what Russell Hoban calls "being a friend with your head"). Everything from a hilarious letter from Proust, a dead Swiss writer in the snow on a newspaper wrapping a parcel, the three hole punch at the Pentagon that puts holes in the paper on which top secret documents written: all of it can blend together in your head and come out interesting art. She even played the clip from WC Fields in The Man in the Flying Trapeze where they make fun of a pseudo-Gertrude Stein-ish piece.

Glad I made the trip down; fortunately Robert was able to give me a refuge halfway home from the train station as I got into Poughkeepsie about midnight. Of course he made me sleep on this: 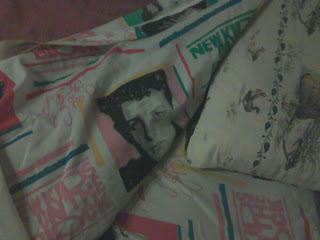 Off to Connecticut today for my joint birthday party with Marko: it will apparently be the last party at the Aloha Alcohula before its make-over. Should be fun! I had my own make-over already: 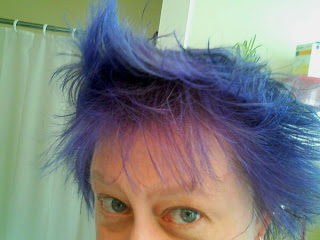 It's actually purple not blue (note how washed out my eye color is), but nice and bright :-) Might wear my purple tiara, too.
Posted by C. Margery Kempe at 13:21

You always seem to be having a rip-roaring time.

Hee. I'll have to look into getting a life...but jaunts, after a youth full of unpleasant travel, seem less enticing, even when I actually have a good time in them. Having heard Lynda Barry speak, I look forward to hearing her again and envy you that experience.

@Patti -- I have a reputation to maintain! Of course, the majority of my time is spend in front of this keyboard (or the one at work) but how boring to talk about that?

@Todd -- yeah, I'm not big on long car rides because of the long, long car rides we went on when I was a kid. My general rule of thumb is if it takes longer than three hours, fly. I'm grateful I'm just a couple of hours from my pals in Connecticut. I miss them lots.