For my latest column, I channel EL Wisty:


A Simple Guide to World Domination

Some people use the holidays to give gifts, bond with families and eat too much. These people will never control the globe.

Lots of people have a good string of days off this time of year when they are free of the mundane tasks required to make a living scraping by in a moderately successful job. Most will spend their time imbibing festive drinks and exchanging gifts. The more ambitious, however, will put this freedom to better use by formulating a plan to dominate the world.

While reading Manisha Thakor's piece on how women seldom ask for raises, instead hoping their hard work will be noticed and rewarded (it won't), I was struck again by the failure of so many women to risk not being seen as nice. 'Nice' will not conquer worlds: look at Dick Cheney. I'm sure Alexander did not remember his co-worker's birthdays. And if Stalin ever brought cookies to the office, they were probably poisoned. If you want to rule the world, keep a few of these things in mind...
Read the rest of the guide: http://life.bitchbuzz.com/a-simple-guide-to-world-domination.html#ixzz18x3hyVk5
I'm off to Robert's tomorrow for Xmas gatherings. Can I be away from the internet for that long? Well, I will have to adjust. I may actually do some reading if I am not (as usual) put to work peeling potatoes (apparently my only culinary skill).

I'm pleased with the latest installment of Kit Marlowe's serial, Airships & Alchemy. It's the beginning of chapter two and we're with the Italian alchemist now -- and his Venetian lion, Eduardo. And as I observed yesterday to a friend, I have a theory that adding a fez improves almost anything. That reminds me: Marko sent a picture of the birthday gift I gave him. Looks good on his car!  :-) 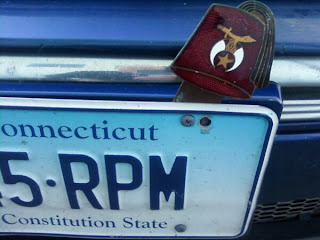 Well, like perfection of any sort, the fantasy that a) one can rule the world and b) that ruling the world would be a particularly happy or useful or fulfilling occupation has become a slightly worryingly cosistent refrain in this blog...the Khans failed to do so, back when it was relatively easy (compared to today) to do so, when the most potent weapon the objectors might use against one was a cannonball and religious sulking. Everyone else in comparison has been a piker. I think the lesson might be taken.

Oprah Winfrey is so often cited, I think, because everyone's impressed that someone who came from modest circumstances and who has been so consistently and so publicly inane has managed to amass such wealth, but such people are usually the kind of people who think that national politicians are profound thinkers and of noble aspiration, rather than canny thinkers and under the delusion noted in the first sentence.

And need I draw attention to the surname? So mote it be, dearie.

Which surname?! I begin to doubt that you have any confidence in my ruling the world. I suspect that you have been listening to certain spindly-legged insects chirping rather than admiring my many fine qualities. Hmph!