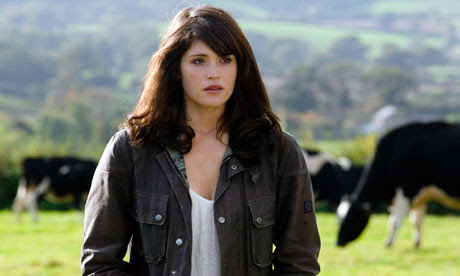 How can you go wrong with Posy Simmonds as your source (and Thomas Hardy as hers), a script by Moira Buffini and a stellar cast guided by Stephen Frears? Well, you can't go far wrong at all, it turns out.  Tamara Drewe is great fun, lots of laughs and a few tear-worthy moments. Admittedly, I'm a sucker for any film about writers and writing, but this one's quite enjoyable.

The story begins in what seems to be the idyllic writers retreat "far from the madding crowd" in Dorset. Tamsin Grieg (made to look much older than she is) and Roger Allam own the farm; she's the careful tender of the animals and writers, he's the successful mystery writer who's a little too full of himself. It's not giving anything away to say he's also a philandering jerk, too -- almost from the start of the film we know this and much of the story revolves around this, and not a small amount of the humor. The writers in residence provide a lot of the humor, too: "The hat is on!" one vehemently tells another, indicating that no one should speak to him. Central to the narrative is the American writer Glen (Bill Camp, who looks like Warren Zevon's nebbishy brother), the unexpected lynchpin as the blocked academic trying to write about Hardy.

What breaks everything apart is the arrival -- or rather, return -- of the native daughter, Tamara Drewe (Gemma Arterton). Her former love, the golden handyman, Andy (Luke Evans) still longs for her but her eye's been drawn to seriously sexy boy band drummer Ben (Dominic Cooper :-), whose arrival draws the attention of two bored village teens, Jody and Casey, who are die hard fans of Ben's band.

Even if you know your Hardy, there are plenty of twists and modernisations to keep you guessing. I love the way the story captures the aimless boredom of the teens' life in an "idyllic" country village, which for them means there's nothing to do. There's extra fun for writers and readers, of course, but I think all kinds of folks will have a good time with Tamara.
Posted by C. Margery Kempe at 17:48

It got mixed reviews (previews?) locally, and I haven't kept up with its progress...instead seeing films about women with deficits who benefit, or don't, from meeting a Good Man (HORNET'S NEST and LOVE AND OTHER DRUGS, where they do) or a Good Woman (BLACK SWAN, where she doesn't, quite).

I suspect some of the humor won't necessarily connect with some Americans, but so it goes. I'm intrigued enough by the widely divergent reviews of Black Swan to consider seeing it.

I really wanted to see this but it came and went in a flash. DVD. And I am seeing BLACK SWAN. Who can resist a horror movie about ballet dancers after the RED SHOES.

BLACK SWAN turns out to be rather resistable, but not bad. If you've been wanting THE RED SHOES, REPULSION, PERSONA and DONNIE DARKO in a blender...

Sounds like fun. Maybe that's what will be my Xmas movie. I am really fond of The Turning Point, too. Maybe it's just sentimentalism about my old ballet days...

About the only way this film is better than, say, THE COMPANY about ballet is in how it makes clear how much masochism is required to be a ballerina. Barbara Hershey is good, as are Natalie Hershlag and Mila Kunis in rather stereotypical roles they mostly enliven.

My brother and his partner used to live in a house owned by a former ballet instructor/director. She was a little fascist at heart, though nice enough to non-dancers. The drawback was that everything in the converted barn had been set for her height, so you always got a backache doing dishes if you were over 4'11".