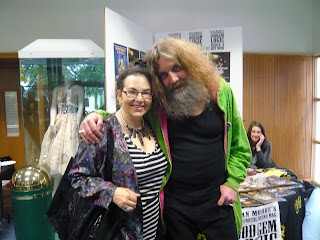 I liked the comic of Brought To Light more than the audio version. Bill Sienkiewicz's art makes it.

Oh yeah, just out of curiosity - which film adaptation of Moore's writing do you think is the most successful?

By a process of elimination (not From Hell, I know you don't like Watchmen, it surely can't be The League of Extraordinary Gentlemen) it seems that it must be either V for Vendetta or Constantine.

Re: BTL -- it's just too didactic to work as a performance for me.

Well, as a big fan of the original Hellblazer who doesn't think Constantine as a non-Liverpudlian works AT ALL (though Tilda Swinton was amazing as always and it's not a horrible film as long as you pretend it has nothing to do with the source), my vote would go to V. Like Jasmine, I thought a good bit of the force of the original was lost particularly with its shift from Thatcherist times to W apocalypse, but that's a change that made sense and the filmmakers were surprisingly effective because they made a movie and didn't just film a comic book.

Albeit the dumbing down of V isn't quite as intense as that of LEAGUE or WATCHMEN...hmm...it still doesn't feel right.

I have some love for Watchmen though, especially the Black Freighter animation. I wish there was more horror animation along those lines.

@Pearce: I haven't seen the Black Freighter. I thought the movie was wretched and the worst sort of fanboyishness (like Alex Cox's concern to get every aspect of Sid's wardrobe correct, but couldn't be bothered to know how many siblings Nancy actually had or if her grandparents were alive). An adoration of the visual with contempt for sense, narrative or character -- which is most Hollywood movies.

@Todd: I don't see V as dumbed down, so much as changed in time (and I totally agree, Pearce: keeping it Thatcheresque would have rung false) and slightly tamed. If Moore wrote the story now (which he wouldn't) it would have changed, too.