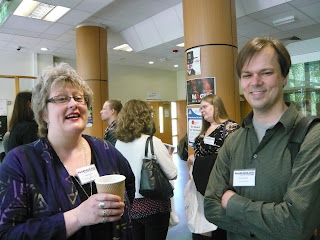 Here's a lovely photo of me and Marc Singer snapped by the wonderful Adele, who already has her write-up of the Magus conference up over at her book blog, UnBound, and has pictures up as well. I was looking forward to this conference despite not quite having my paper done before I headed off to the UK. So many weird things happened while I was working on the paper that I decided to make that journey part of the paper, too.  I think I'll put the Powerpoint presentation on line with the paper as narration, so I won't detail everything here, but I had a lot of interesting coincidences arise from listening to Moore's performance CDs while sauntering through various museums in London and while lunching with my friend Roger Sabin in Red Lion Square (the site of the original performance of Snakes and Ladders.

I ran into Paul Gravett on the train coming into Northampton: I hadn't seen him in a few years, so it was great to have a chance to catch up on the cab ride to the campus, because he was busy right away as the keynote speaker. Adele was in the lobby with everyone else, so we had a chance to chat and meet other folks. I was pleased to see someone else I knew, Marc Singer, who was giving a paper on the Pog issue of Swamp Thing. I was a bit surprised to find that I had been moved from a later afternoon slot to the one immediately following the keynote, but it's just as well to have the paper done, so I didn't mind.

Nathan Wiseman-Trowse welcomed us all to the conference and talked a little bit about its genesis from a half-joking proposal to a serious academic undertaking (but fun, how could it not be?). He then introduced Paul who gave a lively presentation, "Something from Nothing -- Small Killing, Big Numbers: Comics Beyond Referentiality and Reinvention" which tied together some wonderful art exhibits of Moore's work (I especially yearned to see the Belgian one) and these less well known stories by Moore. I was glad Paul introduced the theme of the magic of art, creating something out of nothing, because I was going to be running with that topic, too. In a rather amusing moment as Paul talked about the giant diagram Moore created for Big Numbers, Gary Lloyd ran down with a facsimile so we could all see just how insanely detailed it was (four large sheets of paper with miniscule writing in tiny boxes representing each character and their storyline in all the issues. Wonderful!

I was on a panel with Rikke Cortsen from the University of Copenhagen. Antonio Venezia was supposed to be on the panel, too, but wasn't able to make it to our re-scheduled time and presented later in the day. Rikke's presentation, "Building Fictional Worlds: On the Construction of Place in Alan Moore's Top 10", examined how the variety of chronotopes employed helped map the complexity of not only the interwoven stories, but also the distinctly different time lines that overlaid the story lines.

My paper was a bit less formal and really became a performance about Moore's performances and the weird coincidences that dogged me as I wrote it. Most of you know that I enjoy a little theatricality in my performances and it seemed to go well. There didn't seem to be enough audible laughs at the right places (EL Wisty! Did people not recognize EL Wisty?), but afterward many people complimented me, so I was satisfied that it went well enough. The panel finished with a lively discussion, which soon proved to be the norm. So many people all interested in Moore's work gathering together, it was inevitable that people were bursting to discuss their ideas with folks who knew the score.

Lunch included a screening of Don't Let Me Die in Black and White, but most folks were too busy talking and eating to really take it in. After lunch, I headed to the panel "Chaotic Criminality: The Villains of Alan Moore".  First up was Geoff Klock, who appeared via Skype, which has a great potential for interconnectivity, but I can't help thinking he might have had a better presentation had he actually traveled to Northampton, for it was a bit rambling and had a few factual errors that irked. Mervi Miettinen from the University of Tempere presented "Past as Multiple Choice? Textual Anarchy in The Killing Joke" which explored the carefully controlled 'anarchy' of a dogged structuralist like Moore. Laura Hilton from the University of Birmingham presented "Reincarnating Mina Murray: Subverting the Gothic Heroine?" which compared the very different approaches between the film and the comics versions of The League of Extraordinary Gentlemen to the traditional passive Gothic heroine and both Moore's and Stoker's use of Mina as the powerful prototype of the New Woman. Yes, the excrementally bad film version destroys everything subversive about her.

The final panel of the day had Tony Venezia (Birbeck College) giving his presentation, "'A Sense of History's Patterns...': Mapping Northampton in Voice of the Fire and Big Numbers" which once again returned us to Moore's obsession with his hometown and its geography (and chorography). Our co-host Nathan gave us "Marvel or Miracle: (Re)Placing the Original in Alan Moore's Marvelman" which traced patterns within the history of that much troubled superhero. Deneb Kozikoski Valereto (Leiden University) offered a thoughtful study "Philosophy in the Fairground: The Killing Joke and Thoughts on Madness" which again focused on the deliberate interplay between insanity and Moore's careful and complex organisation.

We had a brief stop at the reception, but then Adele and I went to a pub toward the rail station so she could interview me :-D I'll let you know when it's up. I headed back to London and got ready to do it all again the next day.
Posted by C. Margery Kempe at 07:51

Good report. Looking forward to the rest of it. Gary Lloyd gave me a copy of that Big Numbers chart last year, which I still haven't had a chance to look at properly.

Thanks, Pádraig! Your dvd will be on its way tomorrow if I can manage it.