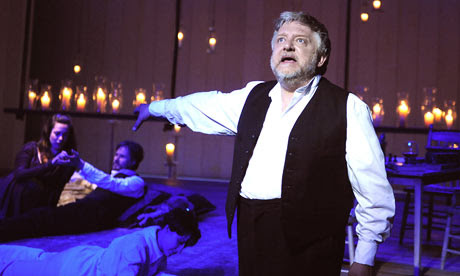 Yes, it's August, so time I wrapped up my recap of June! Week two was so action packed that I cheated a little, because I'm starting week three with Saturday which is not entirely kosher, but oh well. I hit a matinee of The Winter's Tale that day. Most of the evening performances were sold out, as were almost all performances of The Cherry Orchard, which I had been wanting to see (Stoppard's adaptation of Chekov's play) as well. The same cast was in both plays, always an interesting feature.

It was really here, watching Simon Russell Beale as Leonides talk himself in and out of a jealous rage, that I finally articulated the thoughts that had been in my head since the week before about Shakespeare selling capricious plot turns with wonderful speeches, something I need to consider using. Sinéad Cusack was wonderful -- no surprise -- but so was Ethan Hawke as the oozingly slimy Autolycus, which was more of a surprise. I'm not too sure about the Oklahoma! vibe Sam Mendes gave to the sheep-shearing fest sequence, but hey, it's always good to try new things.

At the Globe I got an "Exit, pursued by bear" badge :-D

Tuesday was the day for Goodbye: The After Life of Cook & Moore, which I'd learned about from the Peter Cook Appreciation Society and attended with PCAS stalwarts Hamilton & Hind (Poor Mr Hamilton is in the hospital right now, so send him your best wishes). 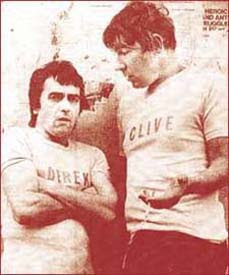 The play by Jonathan Hansler & Clive Greenwood explores Cook and Moore in the afterlife, a grumpy Cook impatiently informing the late-arriving Moore that they will be judged for Derek & Clive in about an hour. They avoid an entirely predictable outcome, and the play offers Greenwood a chance to impersonate a wide range of departed comedians (Peter Sellers, Frankie Howerd and Kenneth Williams very well; Tony Hancock not so much) but the real problem is that Hansler sets an impossible task before him in trying to embody the sparkling wit and arresting charisma of Cook, so instead he plays him as grudging and bitter. No one seeing this would have the slightest idea why he remains a comedy icon. Adam Bampton-Smith makes for a cuddly Dudley.

But we had fun talking about it afterward at one of my fave West End pubs, where (making a stop at the loo at closing time) I found myself unable to resist liberating one of those really faboo posters for Arcadia, which I now need to get framed.

Kate, The closest I'm going to get to your adventure this year is a road showing of To Kill a Mockingbird later this fall. I'll pretend I'm in London though.

Well, Patricia, a road trip is a road trip. You never know what adventure it might bring!

Kate, if you've told me how your love of Cook began, it's slipped behind the mental couch...BEYOND THE FRINGE? SNL? BEDAZZLED? Presumably PRIVATE EYE wasn't your first exposure.

I don't know how people write memoirs with any sense of accuracies (and suspect there is very little) because I can seldom sort out the timing of things. I do know it was (IIRC she weasels) A Poke in the Eye with a Sharp Stick (1976), the soundtrack to what became the Secret Policeman's Balls benefits for Amnesty. This was the first one and was also a film Pleasure at Her Majesty's but I know I had the LP long before I saw the film. The real showpiece was his miner monologue ("I never had the Latin for the judging" so he became a miner, "they only ask you one question, 'who are you?' and I got 75% on that").

Python came before it, because I picked up the LP because of the Python names I recognized, but it's hard to sort out the timing between Python and the Goons because they were on about the same time on our local PBS television and radio stations respectively (as well as "I'm Sorry I'll Read that Again"). For a time there was this complete immersion in British comedy from which I have never recovered. This LP led to my picking up the Beyond the Fringe Broadway soundtracks -- the second one first, oddly enough, so by the time Cook & Moore appeared on SNL, they were already known to me.

So, I owe a huge debt of gratitude to Wazoo and Flat, Black & Circular, two great record shops across town in East Lansing.

This was also my introduction to the fabulously funny side of Eleanor Bron -- who is hilarious on the LP and of course, in Bedazzled, but whom I has known as "the girl" in the Beatles' Help!.

It was my introduction as well as to the Goodies.

Yes, THE GOODIES got a bit of play in New England, or at least Boston, on WGBH as a result of the Eastern Educational Network's smashing success with importing PYTHON and some others (THE TWO RONNIES, etc.) for national distribution (their early importation of DOCTOR WHO filtered out a bit more slowly), so I had a sense of them as well when one of the concert videos you mention (before the SECRET POLICEMAN, probably AT HER MAJESTY) featured primarily Pythonites, the Goodies, and these other fellows from something called BEYOND THE FRINGE...

My introduction to Doctor Who came when I first moved to Boston in 1988 and was for a time unemployed. I read Shelley by the Charles and loafed around, watching DW and Teenage Mutant Ninja Turtles in the afternoon until I got my first job with the telephone survey company.

Of course you're just trying to bait me with that remark about "something called BEYOND THE FRINGE" as you well know. I won't give in and post links to things like the original miner sketch or the Aftermyth of War or one of Dud's songs. And you'll think I'm just playing up to the news surrounding Ronnie Biggs' release if I link to the Great Train Robbery sketch.

Yeah, no fooling me.

We saw THREE SISTERS and CYRANO at our Stratford in Canada, but I miss seeing the ones in England.
Cook and Moore were very funny. Tragic end to Moore's life.

You seem to have a lot of fun, soaking up the culture scenes in UK. Such lucky gal! So no work done at all? Huh.

Bargain with the Devil

LOL! Enid, you are correct. It has been difficult getting back to work since my return from all these trips.

Patti -- Both Cook and Moore gone far too soon.

Clearly, I am a total stick in the mud. You are out and about and having fun. I think I went to the movies one time last month. Bleh.

LOL -- bet you got more writing done than I have, too, Helen. It's a trade off.

See, I haven't even got to the next part of this travelogue!