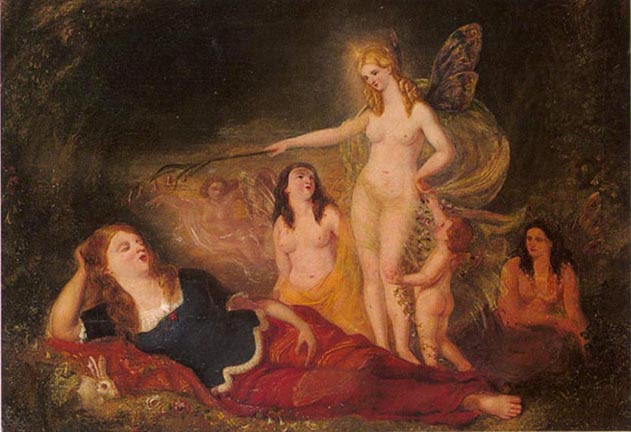 Yesterday I ran over to HVCC's Maureen Stapleton Theatre to see Shakespeare & Co's production of A Midsummer Night's Dream. Conveniently close by and better yet -- it was free!

It's a nice little theater, although the acoustics weren't brilliant. The theater slowly filled up with students and other theater junkies (well, maybe they were faculty). They announced that there would be a talk back session after the performance, which was nice. From the start, this was an energetic and athletic performance from the company of seven -- yes, seven, so there were a lot of quick changes.

They began with several of the cast members using sticks like Morris dancers to beat out a vigorous tattoo. At first I thought, cool! A little percussion is always fun. But then Theseus and Hippolyta came out to mime their romantic backstory, which normally gets buried behind the plot of the happy lovers. As readers of Chaucer's Knight's Tale know, they marry because Theseus has defeated the amazon queen at war. It worked well and they bring the music back by the end.

More than that, there was tumbling and vigorous fights, chases: when Puck is chasing Demetrius and Lysander through the woods, they grab variously homey implements like mop handles and even a "wand" (leading to a big laugh when its wielder shouted "expelliamus!"). The costuming -- often a selling point for this play -- was sacrificed for the portability of travel (this was their 20th of about 70 performances on this tour), but Oberon's costume was cool, more like a goblin king than a fairy one (which of course I liked).

After the play, the cast asked opinions of the audience as well as questions, then let the audience ask questions, too. Students talked about how much easier it was to comprehend Shakespeare's language in motion, which led one older guy to grouse about how it's been "turned into literature" and ruined. Nonetheless, everyone seemed to be energized by the performance. I, of course, can never have enough theater -- more this weekend, too. I filled up on cheap Troy gas (a dime cheaper than on our side of the Hudson) and then headed home, a little fairy dust still lingering in my head.
Posted by C. Margery Kempe at 15:59