In the Great Grey Beast

The great gray beast February had eaten Harvey Swick alive. Here he was, buried in the belly of that smothering month, wondering if he would ever find his way out through the cold coils that lay between here and Easter.He didn't think much of his chances.

Clive Barker, The Thief of Always

Everyone seems to be in the jaws of the great beast lately, sounding gloomy and keeping to themselves. February usually seems to have that effect. Snow yesterday with a bit of ice -- more snow to come Monday, I believe. This time of year, snow has lost its charm and we dully turn to shoveling with grim persistence. Sometimes we just have to hunker down to work and wait for the first signs of spring. But would spring be as sweet without the bitter days of February? 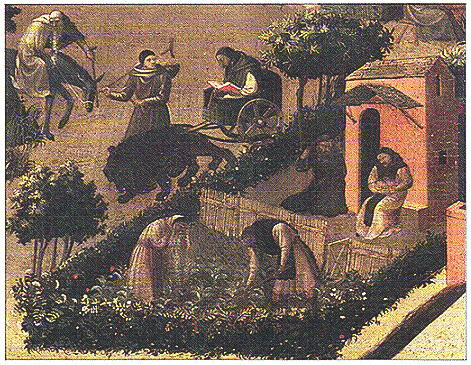 By a river in a green meadow, where there is at all points so much sweetness, I saw a garden, full of blossomy boughs, with white, blue, yellow and red flowers; and cold fountain-streams, not at all dead, full of small shining fish with red fins and silver-bright scales. On every bough I heard the birds sing with the voice of angels in their melody. Some busied themselves to lead forth their young. The little bunnies hastened to play. Further on I noticed all about the timid roe, the buck, harts and hinds and squirrels and small beasts of gentle nature. I heard stringed instruments playing harmonies of such ravishing sweetness that God, Maker and Lord of all, never heard better, I believe. At the same time a wind, scarce could it have been gentler, made in the green leaves a soft noise which accorded with the song of the birds above. The air of that place was so mild that never was there discomfort for heat or cold. Every wholesome spice and herb grew there, and no person could age or sicken. There was a thousand times more joy than man can tell. And it would never be night there, but ever bright day in every man's eye.

Geoffrey Chaucer, The Parliament of Fowls, Translated and Edited by Gerard NeCastro
Posted by C. Margery Kempe at 10:10

Yes, February is a gloomy month. But I try to look at the bright spots it offers...

Such as: that the month is short; that the light returns and is noticeable; that there are so many fun days of note like Groundhog Day, Valentine's Day and presidential birthdays (with days off!); and that it has MY birthday on the very last day! For me personally, my birthday means spring is around the corner.

So don't let the gloomy days of February get to you. Think Spring! :-)

Your birthday's not on the last day this year! Which means our pal Birdie gets her actual birthday this year.

We don't get the president's day off :-( But we can celebrate Black Ethel's birth with much enjoyment!

It's hard, because Imbolc fools you into thinking spring is nearly here, but then it's still cold, still wintry. Drink hot chocolate and be patient, I guess.