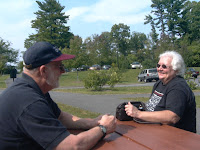 Hey, it's Gene Sr.'s birthday as well as Gene Sr. and Jane's Anniversary. Hope you're having a great day -- and not too much snow. I have a snow day -- whoo hoo! I had already moved my morning classes on line instead of in class, but planned to go in for the 1.15 class. Then I got the phone call from our new automated alert system telling me that campus was closing:

Uh... well, I guess it's better than not at all. Nonetheless, it seemed pointless to go in for the 1.15 class, so I told them to take the day off and curl up with some hot chocolate and a good film. At least that's my plan!
Posted by C. Margery Kempe at 12:01

Yes, "Happy Everything Day" to my Mom n Dad!!! Sorry so late to join in - my computer was overtaxed so I couldn't use it for a few hours.

Hope you both have (or had) a great day!