Apologies if the title invokes images of Mr. Spiggott (spigot by name, spigot by nature), but as this is the first of three planned trips, might as well do what I can to disambiguate them, as they say. Let's see, when I last bothered to write, I had arrived in Hanwell and was anticipating a lovely fish and chips dinner (yum!). The same day flight had a surprising lack of jet lag, a definite plus and I felt rather chipper after my long day that had started the rather early and included falling up the steps at the hotel in Boston. 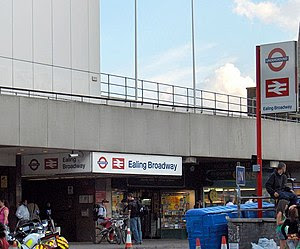 The next day we were off to drop Sophie at school, then head to a birthday lunch for Brad at GBK, the New Zealand sensation now with a branch in Ealing Broadway.

To our dismay, the whole block was experiencing power outtages and we were out of luck. Little did Brad know, another pal of his had flown over from France to join us which created a bit of a problem to keep it a secret *and* move to another location without Brad wondering too much why Liz kept texting with her phone. Fortunately, he was still surprised when we turned the corner on the way to Cafe Uno and ran into Brucie. A nice leisurely lunch later, we picked up Miss Sophie and did a little shopping before heading back to Chez Brooks where video games and later, pizza (mmm) were much enjoyed.

Saturday was my day to see the History Boys

in town, so I left early to leave the busy household to prepare for the onslaught of the parties that afternoon and evening. Good thing I left early: the Central Line was down. Argh! This was the day I made the realization that public transport is like computers. You take it completely for granted until it's not working and then you curse it like mad because it's so inconvenient. So off I went to jump on the replacement bus service

and thus saw things I had never seen before (as I would usually be underground). Well, the interesting-ness of that faded as the time ticked away and particularly when we arrived at Shepherd's Bush only to find that station gated too. Argh! Fortunately, everyone was in the same boat, so we all implored the staff for guidance and soon I was on a bus to Oxford Circus where, alighting from the bus I found myself soon soaked and very glad I had the red wool cape (such a bargain!) to keep the rain off my face.

I had a little less time than I had expected to peruse the bookstores on Charing Cross Road before the show, but I did at least have a little time, but (oh horror!) found nothing that made me buy, although I thought seriously about one or two things (including the first of a few books on Eric Morecambe that I am now kicking myself for not getting, but it did end up being an expensive trip). Then of course it was on to the Wyndham's for the play. Standing room only! And lots of very moist folks crowding into the theater.

It was interesting to see it with another cast -- easier to concentrate on the play itself, which is different from the movie version in some interesting ways. In many ways, the film softens the narrative. The second narrative weaving through the first weights events more carefully than the wholy straightforward chronology of the film does. Nice to see Cousin Jasper on stage -- the cast were all excellent and the view from sitting in the gods gave a good perspective on the shifts behind the scenes. Terrific show and I was so glad to have had a chance to see it.

The play ran rather long (not quite three hours) so I decided to head back, this time taking the more circuitous (but speedier) route via Paddington, because the train to Oxford stops right at Ealing Broadway. Thus I made it back to Hanwell in far less time than it had taken setting out and got back to Chez Brooks during the lull between the two parties and so fed my face and chatted with folks and prepared for the second wave and Liz's superb beef casserole (which seemed more like a Boeuf Bourguignon -- mmmm, need that recipe!).

More later -- so much to do! The semester starts Tuesday and am I ready? Ha!
Posted by C. Margery Kempe at 10:50