We got a "new" car -- of course it's actually pretty old: a 1992 Honda Accord DX, five speed. Nice to have a stick shift again. It looks like this: 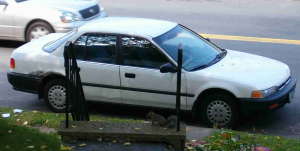 Best of all, it shouldn't be as likely to burst into flames as our mechanic warned the Subaru might. Oh, well -- it did get us here. Maybe we can sell it (the money would be nice), but it's more likely we'll donate it for a tax credit. We can advertise it as rust free, so maybe some DIY folks would be interested in dealing with the "massive oil leak."

Of course the problem is dealing with the DMV again. We have bettered Gene's record -- three trips to get his driver's license. Four trips, so far; let's see if we finally get it on the fifth visit. The last problem? The way Gene's name appears on the insurance card is slightly different from how it appears on his NY driver's license -- largely because they insisted there was not enough room for his name so there's just an "E" on it. No doubt that he was the same person. It simply doesn't fit exactly the form. Talk about anal-retentive rule enforcement. The problem is each time they tell us something new. When this issue was brought up to the supervisor, she said "why are you asking me?" Hmmm, maybe because you're the SUPERVISOR?

We will sally forth once more -- maybe today, maybe tomorrow, whenever we can stomach it. But then, everybody hates the DMV. To paraphrase Stephen Colbert, worst bureaucracy or the most evil bureaucracy?
Posted by C. Margery Kempe at 11:44

Fifth time was the charm. Argh -- what an annoying process. Even though we were able to go to the supervisor's desk, it still meant a wait. The guy next to us started with the comment, "This is the third time I've been here..." There is no help in the land of Patty and Selma.

It's only gonna get worse....the Feds want a national Drivers ID.

Something happy to look forward to....

The DMV is a classic case of small-minded, powerless, unimaginative people getting some sort of perceived power & abusing it.

The one in Willi isn't too bad, at least it's one place I haven't had to be truly evil to anyone yet, but I still feel rather....besmirched...when i leave....