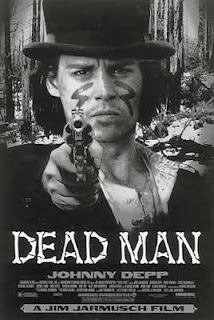 I suppose I should have some sympathy for my replacement at Saint Rose for the coming year. She's going to spend the year staring at the Dead Man poster on the back of my office door (not to mention the Mark E. Smith Stop Mithering! picture as well). The thing with the Depp poster is that the gun follows you around the room. When I'm meeting with students, the door is open so you can't see either of those items.

But I know they're there.

In Dead Man, Depp plays William Blake, a mild mannered Cleveland clerk heading out into the wild West for a job opportunity. His surrealistic journey begins on a rough train and gets increasingly bizarre, dangerous and finally lethal. Depp plays Blake like a holy innocent adrift in a muddy world of cutthroats and degenerates, bemused and constantly off-kilter. The star-studded cast keeps surprising you -- one of Robert Mitchum's last roles, and he is simply wonderful in it -- and Blake, who inevitably ends up in the wrong place at the wrong time and usually covered in blood, passes through the events uncomprehendingly.

He's rescued (sort of) by a mysterious man called Nobody (played by the amazing Gary Farmer), an exile from his tribe who has traveled through the white man's world and mistakes Depp's character for the poet of the same name, though he notes, "It is strange that you do not remember any of your poetry, William Blake." Blake tries to deny that he is that Blake, but as circumstances lead them into increasingly bizarre adventures, even he begins to wonder. As Nobody says, "You were a poet and a painter, William Blake. But now, you're a killer of white men." The reluctant (and confused) Blake eventually resigns himself to the error, and in the moment captured by the poster, claims his name and asks the man he's about to shoot, "Do you know my poetry?"

It's a truly strange film and not one that will suit many viewers. I'm a sucker for a film with both Johnny Depp and lots of lines from William Blake's poetry, but I know that makes me something of a rara avis. It tanked when it opened despite the illustrious cast and the evocative soundtrack by Neil Young. Perhaps my fave among the cameos is Michael Wincott, who turns in a gut-bustingly funny performance as a chatterbox bounty hunter; his best line, "'Course you can't put much stock in a man who spends the most part of a conversation talkin' to a bear... talkin' to a goddamn bear!" He drives Lance Henriksen's more taciturn bounty hunter around the bend. Look for Iggy Pop in a dress. Hee.

See Todd's blog for the round up of TOFs!
Posted by C. Margery Kempe at 07:35

This movie was briefly banned in Australia for sexual violence. Did you spot it? Most people were baffled!

Wha?! I guess it must be my desensitised American senses, but I don't recall anything...

How's the homeland, Mr B? Yeah, I don't get the "sexual violence" angle either.

That's the scene that got it banned in Australia. It was overturned on appeal.