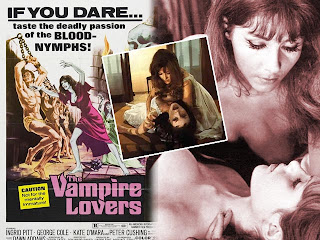 My latest publication is another humorous piece, this time in Defenestration Magazine. It may look a trifle familiar to folks on the Horror in Film and Literature list:

By Defenestration ⋅ July 13, 2011 ⋅
I was a little worried about seeing this as I had not see the first nine installments, but my video store rental clerk (last store in the entire region with actual videocassettes!) assured me that this one stands on its own merits. I didn’t check the box to see if this was a foreign film, albeit dubbed into English, but I suspect that might account for some of the oddities. The film starts in media res, with Dracula already attacking an unidentified woman—erm, well when I say “attacking” the vampire is not going for the traditional neck, but rather explicitly biting away in her nether regions instead. Well, she doesn’t seem to be feeling any pain. The lighting is particularly bad, perhaps because they seem to be in some kind of cave.  Obviously this is not going to be an entirely faithful adaptation. Perhaps it was meant to be a low budget approximation of the castle...
As always, you can read the rest at Defenestration Magazine. Check out their other posts: there's a lot of good silliness there. Silly suits me lately. I suppose it's part of the stress. I'm off to Readercon tomorrow which I hope will be fun and not just a further cause for stress. There are some things I rather wish I had got done before now, but so it goes. Somehow it will all work out, right?
Posted by C. Margery Kempe at 11:11