[I wrote this for another site, but I think it's worth reprinting here.]

This is not a book that should be tossed lightly aside.
It should be hurled with great force.
– Dorothy Parker
I write for BitchBuzz, the global women’s lifestyle network and my column for this week dealt with — among other things — the most spectacular writer meltdown in some time. You may have heard of or even participated in the Greek Seaman Incident as I like to call it (who can resist that name?). I liked Sally Quillford‘s take on the whole situation and how — bad as the author behaved — the need to pile on her after the point was made showed the worst in humans and especially writers and wannabe writers.

What a blessed thing it is that nature, when she invented, manufactured and patented her authors, contrived to make critics out of the chips that were left! — Oliver Wendell Holmes

Writing is an occupation in which you have to keep proving your talent to those who have none. — Jules Renard

There is probably no hell for authors in the next world – they suffer so much from critics and publishers in this. — C. N. Bovee

You need to be able to take criticism in stride. That can be especially hard for new writers and particularly for women because we are taught to seek approval and often take it to heart when someone coldly rejects the manuscript we’ve been working on for days, months or years. Fear of rejection keeps far too many authors from getting their words out where they belong. I know — I used to be one of them. I’d write and write and write — and put it all in a drawer.

Like everything else in life, the more you do it, the easier it gets. Bradbury rule: start something, finish it, send it off, start something else. When the story comes back with a rejection, send it somewhere else and keep writing! You have to learn to take rejection not as an indication of personal failing but as a wrong address. Think of these wise words:

This manuscript of yours that has just come back from another editor is a precious package. Don’t consider it rejected. Consider that you’ve addressed it ‘to the editor who can appreciate my work’ and it has simply come back stamped ‘Not at this address’. Just keep looking for the right address. — Barbara Kingsolver

And rejection doesn’t end with publication. No matter how well you write, you will get critics who do not like your work. Sometimes they will teach you useful things about your writing. Sometimes it will simply be a matter of taste. You can’t always know the difference. Save your snark for your friends; don’t complain on the ‘net because the world is watching.

I decided some time ago that while I could be Elizabeth Bennet in private, I needed to be Jane in public. Be gracious in your dealings with people especially when they don’t deserve it. You will impress everyone (though I can’t guarantee you a Bingley). And just get on with your writing. That’s what you need to do.

Pay no attention to what the critics say; no statue has ever been erected to a critic. – Jean Sibelius

[Why am I scrambling this Monday morning? Because I ran off yesterday to have lunch in NoHo with the QoE and May -- totally worth it :-)] 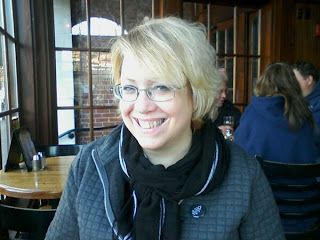 Hm. I haven't published much fiction, in part because in the usual run of things I'm busy doing something else (even if it's simply sulking). And some of the fiction that I have seen published has been widely rejected before being accepted and praised, sometimes highly praised, afterward...and sometimes by people who didn't know me and whose opinion I respect (in my case, that has included Algis Budrys, Ellen Datlow [whom I know slightly better now], Karl Edward Wagner and some others). Some uncomplimentary reviews (not many I've seen), but that's not really worth fuming about, as annoying as the two most obvious were (one because the reviewer manifestly misunderstood everything about the story in question, the other because it was registered anonymously as well as being snotty...cowardice is always an extra bit of annoyance).

But none of that was worth raging about.

New technologies mean new ways to swindle. Education is the best means to combat. On the other hand, I know some writers who spend an inordinate amount of time hunting down piracy of their books. Once there's the ability to make an exact copy of something easily, it's going to happen. Reasonable efforts to combat it should be taken, but writing needs to be job one.

Your experiences show the typical situation, I think. Rejections don't always have to do with quality (sadly, neither do acceptances), and every celebrated book usually went through a lot of other publishers' rejections before its monster success.