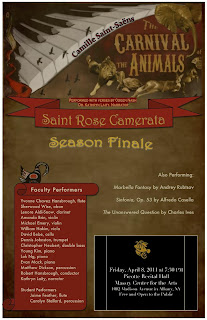 Tonight! The Saint Rose Camerata plays Camille Saint-Saëns' Carnival of the Animals. I will read some Ogden Nash poems between the songs. Unfortunately not among them is one of the tiny number of poems I can recite by heart (which includes Lewis Carroll's Jabberwocky and Dorothy Parker's Résumé):

The wombat lives across the seas
Among the far Antipodes.
He may exist on nuts and berries
Or then again, on missionaries.
His distant habitat precludes
Conclusive knowledge of his moods,
But I would not engage the wombat
In any form of mortal combat.

Get the full round up of Friday's Forgotten Books over at Patti Abbot's blog. I'm stretching the definition of FFB to cover a book that hasn't had much exposure and should: SKEEM LIFE by Gary Robertson. I met Gary on Twitter, first because of his band The Cundeez -- probably because I was touting the Punk Rock Juke Box with Marko (every Thu 12-3 and Fri 11-2 Eastern). Good stuff! As we got to talking, we discovered we both wrote and chatted about plays and books. Gary sent me a lovely package with Skeem Life and his book of poetry, Pure Dundee, and his historical study Gangs of Dundee. You're sensing a theme, eh? He also sent me The Cundeez CDs and a DVD of a performance of his play The Berries.

Well, you know that I'm usually quite good with languages and accents, but I have to admit while I had little trouble reading Dundeez, I have had to listen very closely while watching the play! I'm going to have to watch it again after reading and assimilating the books, but it's a very funny and often rather touching account of a day's work picking berries. Apparently buses would take people out from the city to pick berries during the height of the season, a welcome addition to their often meagre incomes during the tough times, but also a kind of break from the usual routine.

As Robertson puts it in "McGonagall's Disciples" (a reference to the legendary Scottish poet),

You get acclimated quickly. And the stories in Skeem Life are often hilarious though also often relating dangerous events and somewhat scandalous situations, but the matter-of-fact spirit and unflagging sense of fun triumph. It's a hard life, but there's never any self-pity. Great stuff.

Check out the music, poetry and books, and be sure to keep it oary!

Yes, the original idea was forgotten, overlooked and neglected books.

Not necessarily out of print, but I've definitely striven to trend that way. I've done probably five in-print books out of a hundred-fifty or so.

Yes, it's the acclimation that often makes one wonder if the variant transcription is worth the artist's effort...are the alienating effects employed well in the given text?

@Patti -- glad I'm within keeping of the original intent.

@Todd -- by "alienating effects" do you mean the dialect? Yes, employed very well. It's not just for effect -- it's an evocation of pride in the local dialect, excoriated by the southerners in England as well as within Scotland itself apparently. Like the deliberate invoking of McGonagall -- a figure of fun for many -- it's a reclaiming.

How did it go?

Well, here's one review I don't know that it says anything about me, but I had a swell time and we all had fun. And we went out to my fave local restaurant after and I had a martini, so thumbs up all around.

Already brainstorming other ways to mix music and lit. :-D

Honestly, I have to say we have some AMAZING performers at our college. I got to tell them all (rePEATedly) how terrific they were. I did get caught up on the performance so much at one point that I forgot I was supposed to be reading something :-D Hee!