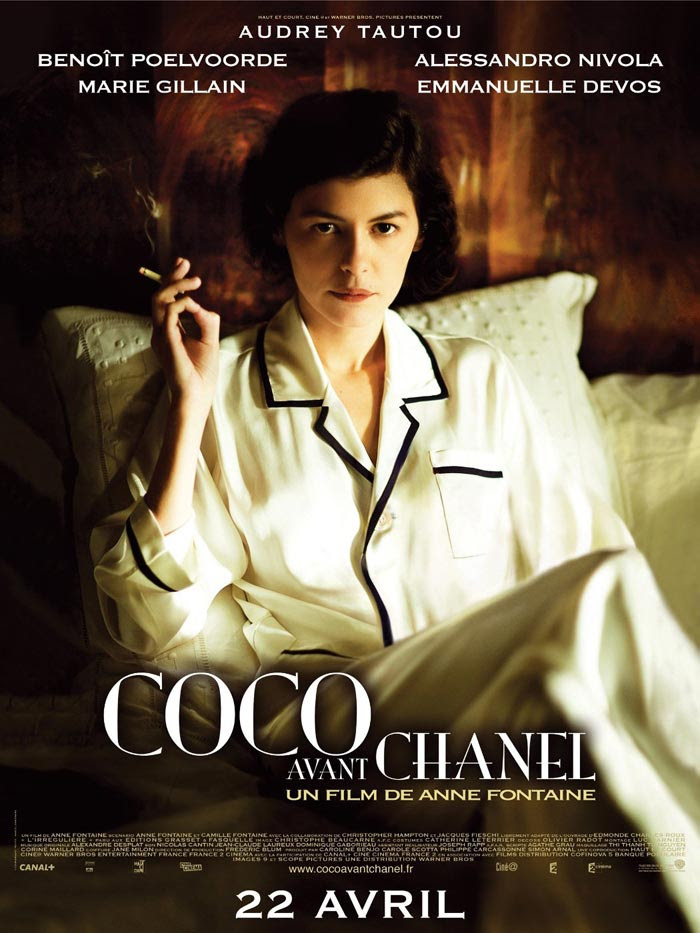 Thanks to my pal Peg, I got to see Coco avant Chanel for free, which is particularly wonderful for a film that I would have paid to see. I have a love/hate relationship with fashion: it can be such a wonderful and practical art, yet so often the practitioners show little imagination when it comes to actually making the body more beautiful.

Not surprisingly, this was a very beautiful film. Audrey Tautou is of course wonderful, but the child they got to play Chanel in the first part of the film was very well chosen: her intense gaze was unnerving. The bitter little orphan grows into a rather prim young woman who is unimpressed by the world and particularly by love. She's ambitious but unfocused; unlike her sister Adrienne (Marie Gillain), who is madly in love with her duke, whom she's convinced will marry her. The sisters work as seamstresses and singers, but Gabrielle (AKA Coco) knows it is a dead end and surprises the baron (Benoît Poelvoorde) who took a shine to her by visiting his palatial country estate. The two eventually achieve a sort of grudging intimacy, that he comes to depend upon while Coco begins to develop her signature style in response to the frivolous frippery of the baron's loutish friends, particularly the dramatic diva who takes a fancy to her straw hats.

Everything changes when the hard-nosed Coco falls for Boy Capel, but in the end, it is her ambition that sustains her -- and that's the best thing about the film. While it tries to shoehorn this love affair into providing the impetus for Chanel's eventual triumph, what comes through clearly is that she was someone with vision and ambition who followed them both unapologetically. It's rare yet to see a film that shows a woman as ambitious without having to soften it somehow and make her more "acceptable" somehow. While the weird telescoping of time that ends the film made us both go "wha?!", in the end the gorgeous look of it, Tautou's and the other fine performances and the unapologetic ambition of Chanel made the film worthwhile.
Posted by C. Margery Kempe at 10:55

Thanks for the review! I love Audrey Tatou so will definitely look forward to this film.

I haven't heard of this film, but I enjoyed your review and now I want to see the movie.

Hurrah! Well, that should be the result of sharing the experience, eh? Now to find a minute to write up A Serious Man...