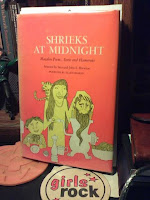 Here is my Rosetta Stone. Its garish orange cover depicts a ghoulishly grinning dinner party with a horse and skeleton at the feast. The feast? Human flesh. An angular woman with a tabby perched on her shoulder sends a bearded man through a meat grinder, while the rest of the guests wait impatiently, forks and knives at the ready.

When I discovered this book in my elementary school's library I was instantly captivated. The mixture of horror and humor in this collection spoke to a nascent hunger in me. No idea where it came from: I read a wide variety of things (at least until fourth grade when I was suddenly overtaken by a mania for reading books about horses in the vain hope that it would lead to my parents allowing me to have one in our half-acre back yard). I do recall leaning toward ghost stories, but the primary influences were Alice in Wonderland and the Mary Poppins series (probably the source in some way of my peculiar strain of Anglophilia that eventually led to my worship of Peter Cook).

For whatever reason, this little book became an obsession both for me and for my little brother. If one of us didn't have it checked out, the other did. In the era of helicopter parents and hand-wringing about the effects of popular media on children, it's hard to imagine parents encouraging this kind of reading. One of the first poems I memorized from this book was Dorothy Parker's "Résumé," that mordant commentary on the drawbacks of various methods of suicide.

Hardly something most parents would brag about, but it was my first introduction to a lot of classic poets, not only Parker, but Langston Hughes, Walter de la Mare, Donald Hall, and the inimitable Edward Lear (how had I lived without him before that?). I mainlined rhythm with the grotesque and rhyme with the macabre. Best of all, I learned the importance of comic timing.

Years later, my little brother found me an old discarded library copy of the book after I dredged up the memory of it in a blog post (which also sparked a similar memory of the book by an old friend). Somehow that Dewey sticker on the spine just warmed my heart. It's become the handbook for our Devil's Night Readings on campus. It's still gloriously enjoyable. If only all old friends stayed that reliable.

Thanks, Patti, for asking me to be part of the FB project.
Posted by C. Margery Kempe at 09:05

My goodness, even the dullest helicopter parent should be cheered by the last line of the Parker, "You might as well live."

Pity I missed this one at a tender age, though occasionally my beloved anthologies of prose would include summa that versified stuff, too...

Helicopter parents, I have gradually realised, are all about complete self-absorption and not about the kids. They like having little dependent beings who love them wholeheartedly (but not forever, hence their constant anxiety).

I blame this book for giving me a mild talent for doggerel. It serves to amuse occasionally, but little more. I will never be a poet.

Oh! Must find a copy of that, stat!

Alice in Wonderland was big for me, too, when I was younger...as well as the Dr. Doolittle books and Jules Verne at that age.

I think Maurice Sendak was the one who inspired my visually as a child- his drawings have a certain flowy creepiness to them that I just love.

YEA!!!
I loved Shrieks at Midnight as a kid! I usually don't like poetry, but I loved this stuff. I used to take it out of our little town library over and over again. It helped me become the morbid soul I am today (well, as my mother would say, I always was a weird kid, and the book helped it along...).