Sophie and her Pig 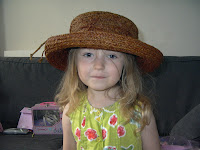 A doodad composed for my little friend Sophie and her favorite toy pig (who doesn't quite fit into doll dresses, but tries anyway).

THE PRINCESS AND THE PIG

There was a princess name of Sophie
And she had a little pig.
It wasn't very clever
And it wasn't very big.
But it was just as loyal
As the day is long,
It could whistle, it could dance
And it could sing a little song.
"Pig," said princess Sophie,
"Let's go to Bangalore!
We'll see Dido, Queen of Cabbage
And we'll take a river tour."
"Splendid," said the little pig,
"Let's go across the sea,
With tortoises and porpoises,
And jellyfish for tea."
They sailed across the ocean's span
On many a cresting wave,
And washed ashore near Bangalore,
Inside an enchanted cave....

Kate, I meant to email you and tell you that the care package did eventually arrive - well, it arrived at the local sorting office where they left it after 'trying' to deliver it one day when we were 'out'. Thank you ever so much for the package, and especially the poem/story. Sophie was absolutely thrilled, as were we. Pig loved it too, but seal said: "Hmmph. Needs more seal."

Can't please everyone I guess :)

Seriously, though, thank you again. We were all really touched and delighted, especially Sophie.

And sorry I'm crap and didn't tell you until now :(

Oh, not to worry -- I had given up hope of it actually arriving (figures someone in Royal Mail had a very Sanrio day). They really did take their time with it, eh?

Besides, I was just being lazy not posting something "fresh" today because I too tied up with other things.

I heard she had a thing for Anise, founder of Rome.

I loved Dido, Queen of Cabbage so much I have already used it twice (in the novel, too).

Do you get students pronouncing it that way, "Anise"?

Well, I suppose butchering those strange names is forgivable. My student all have a hard time with the names in Beowulf and try not to have to say them at all.

A recipe for Gosky Patties passed along by The joey Zone (who refuses to use this new-fangled blogging) which ought not be read by any pigs, but may amuse others.