I received a powerful lesson in mindfulness today. As I was out on my daily walk -- my thoughts a thousand miles away -- I twisted my ankle as I walked down the hill coming out of the forest by Buckingham Lake and fell down hard. The scrapes and bruises on my knees and on the heels of my hands were nothing next to the sprain. I could feel it tearing as I was falling and saying, "Ow, ow, ow!" Oddly enough, although it was a time that might legitimately have called for saltier language, I really did just say "ow" repeatedly.

An elderly gentleman, one of the regulars, helped me get up and dust off. He offered to walk with me or whatever I needed, but I told him I would be okay and was going to go sit down. But as I limped along the path, I figured out that it was going to stiffen up quickly if I sat, so I just walked home. Nothing like pain to focus the mind. Every step was vivid. Yeah, it was pretty swollen by the time I got home. Iced it after a shower, but looking on line I find that you're not supposed to ice for more than 20 minutes at a time, so I guess I'll put the ice away and get out the Ace. 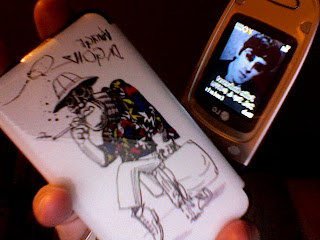 Well, I had planned to blog today on the toys: Ianto's new Gelaskin with lovely Ralph Steadman art, "Vintage Dr Gonzo" and the new phone that now features George Spiggot saying "Julie Andrews!" I had planned a lot of things for today that will have to be adjusted now. You'd think, given my natural inclination toward laziness, that this would provide a good excuse to do nothing, but my perverse nature rebels at anything I'm forced to do; so, forced to be immobile, I get antsy. There's no pleasing some people. I'll be quite bereft without my daily walk -- no rabbits, herons, ducks, kingfishers, turtles, and dogs. There's also the whole pain thing...
Posted by C. Margery Kempe at 10:23

Ouch! I've been there before! Remember, RICE.

Yep, yep -- resting as I type this, alternating heat and ice. I'm even considering -- gasp! -- not going to work tomorrow if I can't walk...

Put your feet up and relax!!!

Yes, foot UP, and don't heat it till the swelling goes down!