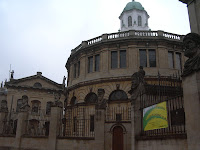 Actually I returned Sunday night, but a bit later than expected due to an extended stay in Toronto. Unlike Halifax (the last place Air Canada stranded me) there were at least restaurants open and a few shops to idle at when I was too tired to read. Apparently I looked sufficiently woebegone that the guy at customer service gave me a lunch voucher. "Oh," he said, "you came from London -- you must be tired." Can we say "duh"? Fortunately I had not quite finished the fourth book I had with me, so I was better off in that respect -- I had to resort to buying something in Halifax. There's not much in the airport bookstore milieu that appeals to me.

The rest of the journey was fine. There was the Australian woman who chewed her gum like cud on the Toronto-London leg, but as soon as dinner was over I put in my earplugs and put on my eye shades and went to sleep. She was frustrated trying to watch the movie because the video was not functioning well. On the return journey, the little monitors worked fine, however I didn't bother watching anything because a previous passenger had apparently broken off the earphone jack in the hole, so I couldn't get mine in. The flight attendant shrugged. Ah, service.

But things looked up as soon as I landed in Heathrow because Liz was there to meet me. It's always good to see a friendly face after a long journey. We were soon home to Chez Brooks with hugs all around and a nice cuppa. There was even time for a nap before picking up Sophie from school, which helped my jet lag considerably. A homey evening relaxing and watching TV, then up early and off to the station at Ealing Broadway for the train to Oxford. Along the way I spotted oodles of crows, some in their nests high in the trees, visible because the leaves were just beginning to come in; a kestrel flew over the tracks at one point, a pheasant strode through a field and a large brown hare sat up, watching the train go by. A magpie sailed over the train and later another one hopped along a garden fence, keeping pace with me as I trotted back to the train station.

It was a terrific conference with scholars both new and venerable examining modern culture appropriations of Anglo-Saxon culture. Heather O'Donoghue chaired my session which was an honor, although my co-presenter John Halbrooks of the University of South Alabama referred to our panel as the "American Ghetto" (we were the only presenters from the States). Nonetheless our panel was well attended and they laughed in the right places. Although I didn't get too many questions at the end, several people came up to me afterward and indicated their enjoyment of it, as well as their eagerness to seek out Buffini's play, Silence. Most had never heard of it, so I'm glad to get the word out. It feels as if Britain lags behind in popular culture scholarship -- some of the grad students in attendance mentioned that they found a great deal of resistance to the topics addressed at the conference. Perhaps the Oxford imprimatur will help batter down that resistance.

A quiet evening watching episodes of Drop the Dead Donkey was just right for the wind-down of a speedy weekend. Up at an ungodly hour in the morning and off to Heathrow -- such is the life of the busy academic. I was tempted in the duty-free to buy a bottle of Absolute Disco [pictured left] but decided to settle for some Cadbury Whole Nut. Thanks again to Brad and Liz and Sophie for giving me a home away from home.
Posted by C. Margery Kempe at 08:40

The last time I flew "O' Canada", the flight crew on the way to Paris was nasty, and they would only speak French-Canadian. So on the return trip, upon discovering that the flight crew only spoke english, I decided to only speak French, causing much aprehension and discomfort for the flight attendant. I settled in, sipped my verre d'eau et whiskey, struggled through the latest issue of Vogue Hommes International,and smiled.

Why didn't you just criticize their language and ask why they didn't speak real French? (Don't hit me, QoE!)

There are words in Vogue hommes? I thought it was just purty pictures.

It's the enigmatic smile that gets 'em.

It is a quandary, and an oxymoron: they are neither French nor Canadian!

There happened to be a rather engrossing interview with Brad Pitt in Vogue hommes.

Speaking of quandaries and oxymora: an engrossing interview...with Brad Pitt?!

My family is card sharps/cattle thieves from Champagne and Inuit - I think that would be French AND Canadian (or, more correctly, First Nations). I think that covers both! Oh, except the ex-pats that choose to live in Canada. I mean Quebec. Because that's the only Canada there is - that other Anglophone bit is all British 'n' stuff...

I've not heard of this 'French-Canadian' language- is it akin to 'American English'?

I have it on good authority from many English people that Americans do not in fact speak recognizable English...