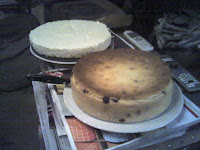 Mmmm -- cake! Yes, not one but two cheesecakes figured in our T-Day celebrations. I made the chocolate chip one on the right, Robert made the one on the left. Both were declared delicious. So was the turkey Robert grilled (yum!) and the real mashed potatoes. Mimosas and bounteous red wine meant we were extremely logy the rest of the day. And the following day, which was all right with Jordan (he doesn't get around as much anymore). 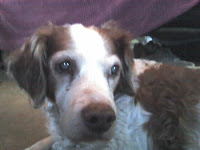 His appetite, however, is as good as ever and he was eager to have some of that tasty turkey. The weather was so nice that we could wander around the gardens and see the koi gobble up their food, too, and see what was left of the late blooming flowers. The tide was in when we got there. We were comatose the rest of the time after all that food, but we finally stirred ourselves to get up again on Friday to see the Coen Bros. new film, No Country for Old Men in Woodstock (which strikes me as a tad ironic, that being the home of good vibes and this film being all about the bad). There were a lot of folks in attendance, so I guess the irony didn't bother anyone. If I can find the time this week, I'll write up a proper review, but suffice to say "highly recommended" as long as you're not squeamish (although much is implied rather than seen, an awful lot is seen), allergic to laconic men, or too freaked out by Javier Bardem's haircut.

He was amazingly creepy -- and who'd ha' thunk James Brolin's son would be so good? Of course, you do expect the best of Kelly Macdonald (AKA the only sizeable female role in the film) but it was also nice to see the always dependable Tess Harper, too.

Forgot to Mention: Raptorama! On the way back from Robert's we must have seen about twenty hawks and falcons right near the Thruway. We saw half a dozen before we got to the Saugerties exit. Wow!
Posted by C. Margery Kempe at 10:41

Grilled turkey? But how....? Sounds delicious!

I've seen a LOT of raptors in the last two weeks, mostly on 395 where they're just waiting for their next meal....that is, when the corvids aren't kicking them off the lightpoles...