As we're a little short on funds this year and trying to avoid the whole tragic silver comb/watch fob fiasco, we bought one present for the season to share between us. But it's a doozy: 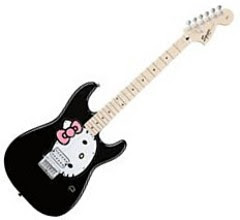 What could be more kawaii?! Fender and Sanrio join together (with a little help from Target -- free shipping even) to get girls rocking and we benfit. It's a real Fender guitar. Gene is teaching me chords and being very patient. It's so much fun just playing music. No, we're not going ever be rock stars, but that's not the point. People just don't make their own music anymore and it's a real pity. It used to be that everybody knew how to make some kind of music, but now everybody passively listens to professionals. Forget that -- make some noise, have some fun. As Oliver Wendell Holmes once said,

Alas for those that never sing,
But die with all their music in them!

Speaking of kawaii, we finally saw all the episodes of Jonathon Ross' "Japanorama" (or as he says, "Japanawama"). Above is a still from his interview with Minoru Kawasaki, director of "Crab Goalkeeper." We learned a lot of new things that we had never seen before (beetle sumo wrestling! creepy Super Dolfie collectors!) and learned a new term for a concept we had noticed before but didn't know it had a special name: "kawaii noir"! Like the cute but dangerous Gloomy Bear who is adorable, neotenic and pink -- but a bear! Sharp claws and an instinct to bite -- so he attacks poor Pity, the boy who rescues him as a cub (I guess Timothy Treadwell never saw Gloomy Bear). Kawaii noir still has the kawaii reaction but with a twist. The show is terrific fun and Ross is a hoot as always, jumping into any new challenge with abandon, even dressing up with super-famous Japanese phenom [yes, really], the former wrestler who now appears as "Hard Gay Man" (it's a different culture, ain't it?). Japan is notoriously homophobic, so it's peculiar to see this cartoonish character become so popular -- even among children. Many teachers apparently think he's a bad influence because kids go around imitating his moves (there are two, thrusting his pelvis and shouting "Hard Gay!").

Well, hmmm -- wandered away from the HK guitar, eh? Well, it's fun and for the future, there's always accessories to get, too!
Posted by C. Margery Kempe at 14:19

You know, that sounds vaguely naughty...