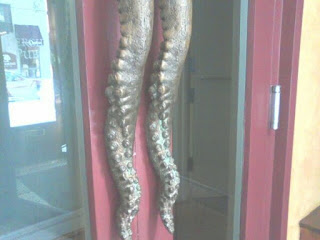 It was a good weekend in Philadelphia -- it was just annoying getting there and even more so, getting back. If you follow me on Twitter you got my irritated suggestions for new New Jersey state mottos ("New Jersey, it leaves a lot to be desired") as I sat in the seemingly endless traffic jams on the turnpike.

So I got there late and had to sneak into roomie Sue Hanniford Crowley's panel to get the room key and jettison my things before rushing off to meet with an agent (more on that depending on whether anything comes of it) before rushing off to my first panel on blogging. We caught up with our other roomie Mason and had a late lunch. I managed to catch pal Nancy Holzner -- she of the kick ass heroine and creator of Deadtown -- to grab a brew at the Perch, a fairly good brew pub across the street from the hotel. It was on the second visit that we finally noticed these fab octopus door handles on the restaurant downstairs from the pub's winding wooden staircase. Fantastic to be able to spend some time with Nancy: as a former medievalist, she knows a lot of things I don't have to explain (hey, she studied with Rick Russom!).

Panels, mayhem, madness -- I got to blather on about this and that. Sometimes there was even an audience >_< but the best part was yakking with friends. In fact I had lunch with Alex on Saturday (Korean BBQ!) and convinced her to come back for dinner with Nancy and Todd. We had planned for Belgian, but Monk's was overbooked and had an hour wait, so noooooo! we went off to the Nodding Head pub but we walked in the wrong door and went to the Oyster House instead which was just as well as it was quiet. I ate octopus: I think it was some kind of subliminal advertising. We went to the pub after, just because, but it was full of college students shouting their heads off singing along with A-ha's "Take On Me" (O_o) and some other 80s crap music. Phil Collins made them run off, however, so we finished our drinks in quiet and headed back to the hotel, where we hung around and ran into more people and what not (which is the brief way of saying it's all too much fun to write up).

But I'm back and there's a million and one things to do yet and so very little time in which to do them. Ay yi yi. Somehow it will all get done -- or at the very least, somehow I will be in Eyre Square on September 5th and all this will be behind me.

Tip o' the captain's hat for the Pirate Pub Propper of the Bar and Pirate Therapist @MrTumshie's playlist and for my introduction to the band I clearly have been needing to meet for years, Half Man Half Biscuit.

Actually, Fleetwood Mac's actually pleasant "Rain" made them run off (or they'd shouted and cavorted enough to grow sober and non bobble-headed again), so the bar pulled that one within a few bars and tried to lure them back with Genesis's "That's All" and further songs that no amount of drunken caterwauling augmentation will disimprove. (I will take Collins over A-ha. Ambrosia, which followed and puzzled us momentarily as to who they were again--we were all shockingly badly lapsed in our yacht-rock studies--is also preferable to really dull Scands.)

I hasten to note that confusion of Mason and myself will get one nowhere. She does resemble me to the extent that we are both mammals. You'd much rather look at her (trust me).

Nancy and Alex were also great company. I was certainly there, in contradistinction.

Oh, now you've exposed the tangle of lies and misremembered events that make up this blog. I knew I had forgotten the initial song and it was something by the Mac. And that's not Genesis, it's Genesis-with-Phil-Collins which is not at all the same thing.

Mason is a lovely French/Belgian/Canadian writer with a saucy tongue, so I doubt there will be much confusion. It was a great evening!

My tongue being more the peppery sort...(I'm Canadian French in part, too.). But she's still better to look at. Her tongue, probably, too.

Alors. We're both Cherokee, too. Maybe we are the same person.

I saw you both that night, so I can attest to you being separate folks. Doubtless kilts don't do as much for you.