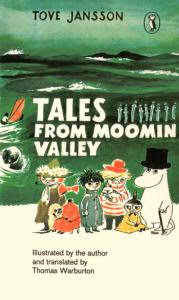 Known and loved around the rest of the world, Tove Jansson's Moomin books seldom get exposure beyond the Finnish-American communities in this country. I suppose it's because Moomintroll himself often presents a rather melancholy figure, who feels sad without everybody around him demanding that he cheer up.

When you look at the aggressively happy face of so much of American children's books (in contrast to the gritty, dark nature of so much YA reading) I suppose the Moomin tales stand out. Loosely based on Jansson's own upbringing in a bohemian family of artists, all the characters are eccentric and allowed to remain so. They range from the Moomins themselves to the nervous Sniff, the anarchic rebel Little My (after whom I named one of my five-string kanteles) and of course, my favourite, Snufkin -- to say nothing of Hattifatteners, Hemulens and of course, Fillyjonks. The books are about doing and making and finding your own interests and being curious about the world and the people in it.

Tales from Moomin Valley collects short tales that happen around the longer books. One of the underlying themes is that people who worry too much generally find they're wasting their time. Peace and a mutual respect are the only real requirements. In "The Invisible Child" (who's become invisible because she's too timid) there's a wonderful moment where Jansson writes of the family, "They continued their work in peaceful silence." People seldom know what they would really enjoy: the "Hemulen Who Loved Silence" finds out that maybe it would be more fun in his park if people could laugh and "possibly even hum."

The first story is a Snufkin one: he's my role model -- especially now. When Moomin and Sniff meet Snufkin for the first time in Comet in Moominland he tells them, "I'm a tramp and I live all over the place...I wander about and when I find a place that I like I put up my tent and play my mouth organ." When asked if he might be a painter or a poet, Snufkin says, "I am everything!" He finds the memory of things far superior to having the things themselves (hence my role model) and hates all kinds of authority, especially those who wield power for its own sake. Thus he hates the Park Keeper who continually puts up signs forbidding things: "All his life, Snufkin had longed to pull down notices that asked him not to do things he liked to do."

In "The Spring Tune" Snufkin wanders along, a tune just about ready to be born from his head. I love the way Jansson talks about the process of creation, finding that just-right moment to make something manifest, too soon and it gets stuck, too late and it escapes all together. When he thinks of how Moomintroll will like the song, he suddenly starts to feel annoyed with the idea that his friend is waiting for his return. Nothing a traveler likes less than being expected. When a strange little creature treats him with something like hero-worship, Snufkin warns, "You can't ever be really free if you admire somebody too much."

These stories are just wonderful: get all of Jansson's books, including the fantastic and fun comics collections from D&Q.


As always, check with Patti Abbott's blog for the full list of overlooked treasures [oops, or this week over at Todd's].
Posted by C. Margery Kempe at 07:11

Or, as frequently, check mine as I backstop Patti this week! I think this is the first (or if not, your second) MOOMIN entry in the FFB series! I exclaim this morning! But with a certain Belgian children's fantasy series getting a lot of movie attention, Moomins deserve a more discriminating review...

I've seen a couple of Moomin books over the years, in used book shops I think, but have never bought or read one. I wonder, beside the adult who enjoys such stories, what the age group for these would be?

These look and sound vaguely familiar. I may have come across them a long time ago. Something to keep an eye out for the grand nieces and grand nephews. I like the simple and truthful themes you point out in these stories. Plus a family of eccentric bohemians! What's not to love about that?

@Richard -- Jansson didn't really have an age in mind, she just drew them to amuse herself.

@John -- you may have seen the comics, too. Drawn & Quarterly has been putting out the comics in gorgeous collections.