Had it with you, Simpsons 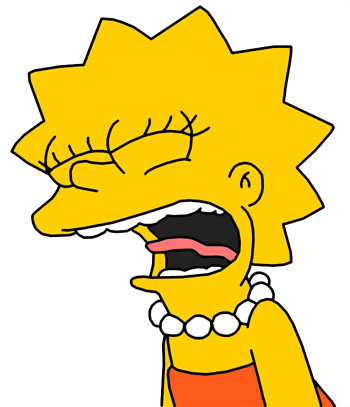 All right, it's been bugging me for at least this whole season and maybe a little longer: the misogynous thread that's crept into The Simpsons. Yeah, the show that once trumpeted stories like Lisa Lionheart and Marge going round the bend because of the stress of her family's unreasonable demands, has not had a show lately that didn't feature some moment of head-jerking anti-feminism. I've skipped more and more episodes because of it. Like the recently rerun Pranks and Greens episode, where Bart discovers he pales in comparison to a super-pranker in the past. Bart asks who he is and Skinner says, "Who said it's a he?" After Bart's stunned, "Huh?!" Skinner tells him nah, it's a guy, of course, and they both laugh at the absurdity of thinking it might have been a girl.

Last night's episode capped it for me. While the B story about Lisa getting popular when she receives an F and featuring Angela Bassett as Michele Obama made a feeble attempt to prop up the "girls can do anything!" message that was once key to the series, the main story had to do with a poorly written cameo by Sarah Silverman as a girl Bart kisses and whose parents threaten to sue the school. The "character" is simply defined by the way she capriciously jerks Bart back and forth between affection and scorn. But as the final lines of the show proclaim, that's just the way women are.

It's sad to see this happen to a show that was once groundbreaking. Enjoy your "poor men are just victims of wily women" scripts, guys. Seems I'm not the only one giving up on the show (even though it's miles better at its worst than anything from craptacular Seth McFarlane).

Well when a show (and its producers, writers, etc.) are free to skewer anyone --or any cause--they choose, all participants are very likely to fall into hubris. We aren't the only ones to notice that the exercise of restraint has been woefully absent from the entertainment world for some time. Goring sacred cows can become so much fun that the culprits soon won't care who is offended--it's more publicity for themselves.
It's sad to see this happening to The Simpsons but it's almost inevitable. (Look what South Park did to Tom Cruise. And SP WAS a piece of crap compared to The Simpsons!)

True enough: egos do get inflated so easily. I'm disappointed that Al Jean, who left and then returned, has turned his tenure into such a disappointing run.

I don't mind SP: they tend to wield a massive sledgehammer, but they have done some funny things. I despise Tom Cruise, so I doubt I'd feel too bad about their treatment of him. They had a surprisingly thoughtful episode (well, for SP) in Breast Cancer Show Ever that dealt with the pervasiveness of misogyny in an interesting way.

I'm not a Cruise fan either. But to attempt to destroy someone with ad hominem charges is beyond the pale with me. Attack him on some of the stupid things he has said or done. But don't attack him on a rumored sexual preference. ("Come out of the closet tom!") Such a tactic is sleazy and not to be tolerated. Even someone like TC has a right to just treatment. This time it was an assault, in a sense, on "gay" America. Next time it could be one of us.

Oh man, Julia Davis is so great. Why have I not heard of Lizzie and Sarah before?

I think that's a misreading of the South Park episode on Tom Cruise, btw. It's not an assault on "gay" America, it's an assault on Scientology's homophobia.

The line between making fun of prejudice and actually displaying it is thin, but I think SP walks it much better than, for example, the Family Guy.

Also, killing a blue whale by writing "twat" on its flipper with a sharpie is more likely than SP managing to destroy TC. Making a joke like that about someone who WASN'T one of the richest and most famous people in the world (and who did not put themselves forward as some kind of guru who can fix the world's problems) would be terrible, but Cruise had already done a great job of making himself look preachy, humourless, ignorant and willing to believe in any old rubbish that I don't see how his many millions of fans could possibly be rocked by a crudely-animated tv show making a joke about him.

Thanks for the clarification Pearce. I stand duly corrected. Guess it's a knee jerk reaction to the incivility which has swept the country. I wasn't raised to jeer or cast aspersions on anybody and it's pervasiveness today just repulses the hell out of me.
Enough ranting. Got carried away as usual.
Thanks again for the correction and eleucidation. LOL. :-)

I didn't see it (THE SIMPSONS has been getting duller and duller for a while) but that "Who says it's a he?" joke sounds, even in its resolution, as more a joke on the boy's club 'tude, but I'll take your word for it.

Scientology makes a major appeal to homosexuals who want to not be homosexual, in much the same (explotive) way that the Ex-Gay Christian folks do...taking the opportunity to mock Cruise, as Pearce notes, and R. Kelly at the same time, is at least as much a mockery of the pomposity and (unwitting?) exploitation of Cruise (and some other folks).

I find the popularity of Family Guy inexplicable. I find it offensive because it's sold as a comedy and not funny. Ironically, the South Park parody of it made me laugh (just as parodies of the Three Stooges make me laugh but the originals don't). The structure of it irritates me and the tiny bit of lip service to "parody" is unconvincing.

Hey, Pearce -- nice to see you drop by! You probably haven't hear of Lizzie and Sarah because the BBC is burying it with an 11.45 pm time slot. Fortunately, Jessica's pals Edgar and Simon are tweeting it up.

Eh, I stopped watching The Simpsons. I can't recall exactly when. It just became less and less of a "must watch." I agree with Todd Mason that the joke in question sounds like a "wink" joke at the "boy's club" patriarchy that failed miserably.

I love that SP episode about breast cancer. Then again, maybe it's because it's "Wendy" beating up Cartman... very satisfying. And Principal Victoria's advice was likewise moving.

Yeah, I have had a sad loyalty to the show that mostly relied on needing a break about that time of night on a Sunday (usually write the next episode of the serial afterward). In the context of the whole season's rhetoric, I can't really dismiss it in that way. If it's meant to be, well then, it's ineptly done (also a distinct possibility).

Yeah, I figured you'd like Wendy's triumph :-) and you're right about the (surprising, I suppose) touching speech by Principal Victoria. For all their crudeness, the SP guys can be quite heartfelt (all cynics, I am reminded, are just disappointed romantics).

I should admit that I think South Park suffers from having obnoxious fans who only see the surface vulgarity and miss the intention, which is sadly common.

I once spent most of a weekend watching Family Guy with a close friend who thought it was the funniest thing in the world, and who was dying of cancer. So I feel oddly conficted about it: on the one hand I don't like it at all, but on the other hand it strongly reminds me of Judy.

I'm so sorry for your loss. That's a strange situation to find yourself in (yet life is full of such ironies, I suppose).

Yeah, I think a lot of SP fans are like all the Watchmen fans who dig Rorschach (shudder).

Well, if there's one thing McFarlane cartoons are about, it's distraction, and I suspect your friend, Pearce, was looking for distraction in her entertainment about then. Hugh Laurie's hearty endorsement is rather more puzzling. He's funnier w/o trying than anything I've seen on the SMcF series, as they proliferate.

Lazier SOUTH PARKs are all about the obnoxiousness...the ambivalence they have about the lessons they impart is sometimes rather attenuated, and their earnestness isn't always to their credit. But often they are very much on target, and even the description of the mockery of FAMILY GUY was amusing, much less the episode itself. Among even more deserving targets.

Well, I'm ready to suspect that Laurie is doing the good deed for the company, supporting another FOX show. He is nothing if not affable. I can't really believe that he's fond of the show, but perhaps he is and I shall have to be disappointed with the man who has made some of the funniest sketches I know.

Which would be a pity (flushed or galvanised?).

I was thinking on the driven in to work this morning about how the best US comedy in film tends these days to be from the improvisational folks, and the most popular from their cousins, and neither is altogether likely to tuck in the corners (though particularly when the first set are on television, they often have had the opportunity to "spritz" or otherwise go down some very interesting alleyways that film production is less friendly toward).

You mean things like Best in Show and Waiting for Guffman? I'd certainly agree there. Other shows I find funny: Strangers with Candy and Arrested Development -- as well as Colbert and Stewart.

SCTV at its best is still the gold stnadard. I liked SCRUBS better than ARRESTED DEVELOPMENT, but enjoyed both (and both were in part out of the improv tradition). THE DAILY SHOW and THE COLBERT REPORT also spring in part from that tradition.

Ah, yes -- SCTV! I never got into scrubs. The actors annoyed me too much. Not that I gave it much of a chance, admittedly. I am a hard sell on television (yes, keep talking about Castle, friends -- I might check it out eventually). Just no time!

Oops -- forgot I had changed identities. Working on the Study in London blog. Please sign up, students!