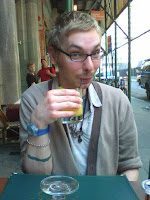 I headed down to the city on Saturday and the first stop was to have brunch with pal Dana from the Horror list. Dana joined the list when he was thirteen, so he made me feel ancient. Nonetheless we had a good time laughing and gossiping over our meal at Iguana. After our meal, I sauntered down to Studio 54 to see Beckett's Waiting for Godot. They still have the leopard skin carpet that Bianca and Andy waltzed down while on their way to groove the night away with their plastic bags.

It was a interesting production. The difficult things with stars is that it's hard to see them as anything but themselves. As good as Bill Irwin and Nathan Lane are, you can't really forget that they're who they are and not really Didi and Gogo, although I completely believed their adventures. The clowning aspects in particular came off well -- the hat sequence and the (apparently) fortuitous popping off of Lane's hat into Irwin's hands. Wonderful! Goodman, too, was wonderful, but you couldn't stop seeing him as Goodman.

Glover, however, made me forget who he was. He was Lucky. He took up this often stylized part and made it both shocking and real. I have a beef against Glover because I really didn't like his audio book version of The Thief of Always, but I suppose it's time to let that go and let him get beyond Lionel Luthor. 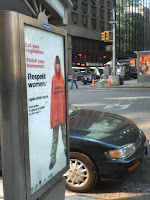 Walking toward Columbus Circle and Central Park, I saw this woman-positive advert and tried to take a picture of it to capture the Hooters restaurant in the background (that's the orange neon), but I don't think my phone was up to the complexity.

I hung out in Central Park and watched the people who crammed the park playing and relaxing, before heading back to Grand Central and the train via the cramped and sweaty subway. I got some lovely cards from Papyrus which I plan to use and enjoy, and drove back from Poughkeepsie listening to Robyn Hitchcock (yes, still!).
Posted by C. Margery Kempe at 21:59