Sunday was Bacon day! Over to the Tate Britain in the cold cold drizzle (it always seems to rain when I go over Pimlico way). I had expected wonders from the Rothko exhibit, but I hadn't quite realised how much the Tate had gone all out for Franky Bacon, including a bunch of talks (none while I was there, alas!), study days, a symposium and family events (?!) including "Bend it Like Bacon" where you could try to recreate the figures in the paintings and "Bacon for Begninners" where young artists would look at Bacon's beasties and then create their own. How can you tell it's not an American museum? No, no, not because it's publicly funded. It's because that session was labeled "for under 5 years." Despite the recent panics over knives (admit it, it's a panic), there's still a willingness to let children do scary things WHICH THEY LOVE! I remember it well.

The exhibit is enormous! The layout is odd as you find yourself in cul-de-sacs wondering whether you've reached the end, only to peer around the corner of the room you already went through and find another you haven't seen on the other side. The rooms bear names like "Apprehension" and "Crisis" and "Epic," stark labels that the paintings match. If you only think of Bacon as gaping grimaces and tortured flesh, this exhibit serves as a reminder of all the variations through which Bacon passed and offers many surprises from the 1933 crucifixion which hints at all the early paintings destroyed to the surprising whimsicality of a sudden spray of water which seems to splash right out of the frame among his late work. There is a reel of BBC interviews that show Bacon murmuring with erudition in that silky voice so at odds with the frank violence of much of his work. Wonderful! 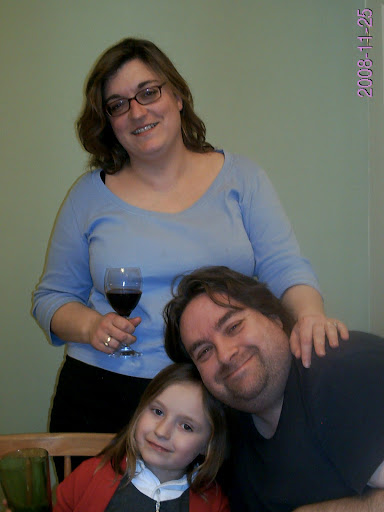 Monday I finally made it back to the National Gallery, snapping a bit of Les Grandes Baigneuses as wallpaper for my phone, visiting the Caravaggios and tracing the steps through a portion of the gallery I want to use in a story. A flimsy excuse for a trip to London, but there you are. I checked out the Sisley exhibit, too, which was like a lovely visit to Wales.

Then it was time to head out to Hanwell to visit that talk-of-the-town, London superstar Sophie Brooks and her "entourage" (or you might say, her mum and dad) where as usual I was treated to lots of good food (mmm, thanks Liz!), fun conversation and plenty of dancing by the superstar herself, although the highlight may have been Sophie and Brad's re-enactment of the classic "Duck season! Wabbit season!" dialogue. As always, I got to laze around and enjoy their hospitality and feel at home. Perfect way to end a trip (if it has to come to an end, sigh). Big thanks to my hosts in London for a lovely time -- and aren't they a handsome bunch?

Long day today -- somehow my colleagues and students were not the least bit sympathetic to my moaning about all the work that piled up while I was gone. Sigh.
Posted by C. Margery Kempe at 21:44

If you had the decency to have a terrible time during your travels, I could muster up some sympathy for all your piled up work.... :)

Hee hee -- sorry, I'm incapable of having a bad time while in London. It's just not possible!