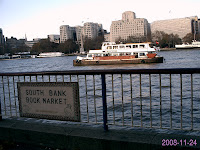 Now that we're back from Robert's where he treated us in the usual style, i.e. stuffing us silly with good food and drink, I'm finally facing the horror of catching up with all I've neglected while swanning off to London. Is writing it up just another way to avoid work? Oh, let's not think about that.

Despite the new camera, your correspondent is as crap as ever at taking pictures, now complicating this with the additional factor of crap video ('auto-focus' my Aunt Fanny) -- when, of course, she occasionally remembers that she has a camera with her.

Well, let's see -- I took off a week ago Wednesday after teaching my classes and attending a fairly painless faculty meeting. May dropped me off at the airport (thanks!) and there was really no line at all for security, naturally, because I had left plenty of time. Go figure. Once through security I fell into that zen state that airports always invoke: the knowledge that what happens is completely out of your hands until you get to your destination, so why worry. I suppose it applies to the rest of life as well, but I haven't been able to invoke that view consistently -- something to aim for.

Short hop to Philadelphia, leisurely wait there and then a mostly empty flight which featured the worst meal I have ever been served on an airplane. Beet salad -- what possessed them to think a beet salad would appeal to the broad spectrum of coincidental travelers? I can only imagine a very persuasive salesperson in the market that day ("oh, try this recipe, it never fails!"). I was grateful I'd decided to have a turkey wrap a couple of hours before that. I had a whole row to myself and stretched out to get some sleep. Before I knew it, they were bringing breakfast around.

The first day, inevitably, was the struggle to keep jet lag at bay. Walking around just to keep awake, indulging in a beer and a light meal and eventually collapsing at a reasonably late hour. Friday was the day in which things did not go as planned. While I had mostly planned for arty things this time around, I had hoped to catch one play. Top of the list was Ivanov, but the half price ticket booth had nothing but the usual Broadway transfers and the box office's long line was met with the announcement that there was standing room only. At 2 hours and 40 minutes (and after one day of walking around on that ankle) I decided that maybe I didn't really need to see a play that night. There were a couple of other plays I might have considered, but weren't on that night. While having a think, I wandered and decided to drop by the Portrait Gallery since I don't tend to go there as much. I walked in to find that most of the lights had gone out and people were standing around in knots waiting to see if they would come back, while docents were trying to keep kids from retiring to darkened corners. It was kind of interesting to see the gallery plunged into darkness.

I went around the corner to the National Gallery, only to find it surrounded by crowds of people all staring with the aimlessness of the unexpectedly idle. So, no good there either. I sat on the steps of Trafalgar Square for a bit, writing in my travel journal, then took a leisurely walk in the direction of the British Museum, stopping at Quinto and a few other places to browse, but buying nothing (longtime readers will tremble with shock to hear that I purchased only one book the entire week). There was an exhibit on at the BM, 'Statuephilia' which inserted modern sculpture amongst the artifacts. While it gave me a grin to see Damien Hirst's skulls in the old oak cases around the corner from Doctor Dee's scrying mirror, the exhibit also discarded the artificial division between art and artifact. Antony Gormley, whose 'Case for an Angel I' fills the entrance (making me imagine little kids who assume it to be an artifact and so conceive all manner of strange alternative realities) writes that the BM "is a laboratory of possibility for any creative mind." Indeed! 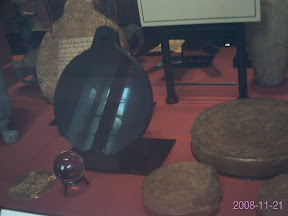