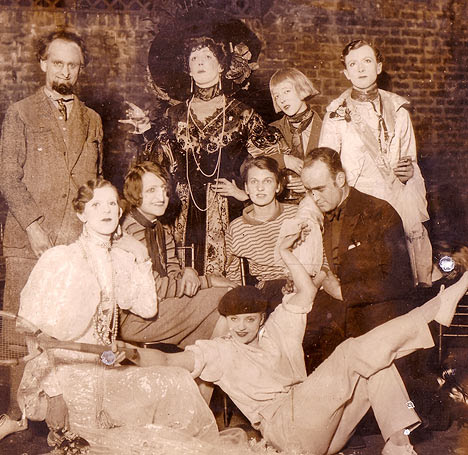 is mention of a Punch Magazine

piece from April 1929 called "The Dull Young People" which Taylor calls a "labored parody" of the sparkling folk. But the description made me laugh out loud:

Here Punch's correspondent is escorted by "Lady Gaga" to an entertainment hosted by "the Honorable Batsin Belfry" and her husband "Bobo." Arriving at "a little house in Bloomsbury" ablaze with light, the couple fight their way to the dining room, over whose door hangs a sign reading WE'RE ALONE. RUN IN FOR YOUR RUM. Here Bobo, in maritime gear, dispenses drinks to a "perspiring mob of boys and girls in rather too elaborate fancy-dress, most of the latter showing a curiously unoriginal preference for trousers."

"For all its heavy-handedness, this is a rather accurate take on the Bright Young People's ambience," Taylor asserts.

But what of Lady Gaga?! Punch predicted it, eh? Having a nice private chuckle about it, too. I'm trying to get a copy of the piece via ILL. We shall see how much Lady Gaga there is...

Of course the book's due tomorrow; I haven't had time to read much of it. I got it after I was inspired by writing a story set in Jazz Age London, but I didn't ever quite get caught up in it. I found this passage by accident as I flipped through the remainder. Luck, eh?
Posted by C. Margery Kempe at 22:35

Lady Gaga...wonder what inspired her to take the name...you don't suppose she had access to a backfile of PUNCH, do you?

I mean, one had to break up the tedium of club-kidding somehow...

Probably not; she's said in interviews it was actually Queen. But perhaps she was playing to the audience and has hidden depths of complexity. Why not?

I just wish I had confiscated that name before the current user did. It so suits the aging brain.

Perhaps you could swipe the alternative Matron Gaga!

I'm sure there must be several Madonnna Gaga draggers by now...but Ms. Gaga Ma'am Indeed might well still be available for registration.

Oh yeah -- not to mention parodies, everything from "Rad Bromance" to the Sims.