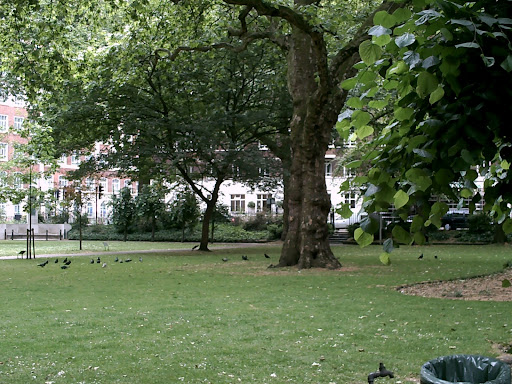 Okay, I'm going to make my usual hash of things by lumping together a bunch of things because 1) I didn't take a lot of pictures the first week (forgetting the camera at important junctures of course) and 2) even with the aid of travel journals, memory fades. Here's lovely Tavistock Square, where the Gandhi statue overlooks Starbucks and the hotel's wireless reaches across the road into the square (very handy).

Those of you who followed my adventures on Twitter know that I had a good deal of anxiety that I would never be leaving Albany, let alone getting to London. When I got to Philadelphia, I had just enough time to check in and see all the very unhappy people who were not getting on the overbooked flight (yeesh). Once on the plane, we were held up on the tarmac while they moved the food from the plane we were supposed to be on to the smaller one we actually were taking -- for about an hour. During that time the woman in front of me proved to be such a chatterbox that several people began to wish a punishing and painful death upon her. I finally got up, exasperated, to get my earplugs. The guy next to me begged for another set, but I had none to share. I've never seen such a fractious flight. The flight attendants just ignored the people who were nigh on coming to blows over nothing (US Airways, if you want to know).

But we got there, got through passport control, got through the first day of jet lag and on the second night headed to Treadwell's for a lecture by Owen Davies, whose new book Grimoires had just come out (and I had a copy for review!). It was a fun talk which gave a nice overview of the book, which tells about the history of magic books in the States as well as in Europe.

The next night I had dinner with my old friend Susan Emfinger, who curse the luck, still looks like Jerry Hall's better looking sister. If she weren't also witty and intelligent, I'd have to hate her, but she's so much fun, I can't. Careful readers will know she was part of the film that gave this blog its name. Yet she still speaks to me. I forgot the camera, of course, which irks me. We went to Istanbul Meze which was fantastic, then dallied at a pub not too far away.

Of course, what many of you are waiting for is the end of the week -- the Angela Carter Conference in Northampton and yes, meeting Alan Moore. But you're going to have to wait until tomorrow for part two!

Susan Emfingers wherever you go, Kate...or, at least, one also in Houston, who is as pale and blond as Jerry Hall, too...Continental can't have All the bad customer service. Even though Something about Wombat sent my browser madly replicating itself, I look forward to installment two, much the way Gandhi led the Indian independence-seekers to gather their own Mocha Frappe Lights rather than take one more day of the Imperial Marmite milkshakes...

Oooh, you had to mention Marmite -- blech blech. You know they have Marmite flavored potato chips (AKA crisps) now. The ad campaign makes use of the gulf between opinions on the taste.

I have to say, US Airways has been the flame keepers of the nadir of the traveling experience for some time. They possess the sole advantage of being cheaper than any other airline (with reason, one might say). Well, and they have yet to strand me in Canada as Air Canada did on three occasions.

THANKS for The Kew pix! :D

Oooh- Marmite crisps? Must have!

The Grimoires book looks fabulous....must have!

US Airways- horrific. Every time. Must Not Have!