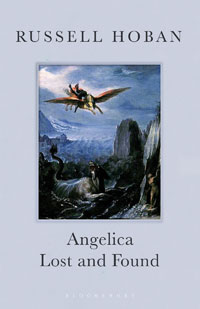 When Russell Hoban died, I was among those who went first to Riddley Walker in mourning his passing. Somewhat neglected in the encomia was his latest book at the time, Angelica Lost and Found (though now Soonchild is out, too).

Angelica finds its inspiration from Ariosto's Orlando Furioso and from a painting of a key scene from the epic poem. Angelica is the woman chained to the rocks on the beach. The hero Ruggerio flies down on a hippogriff to rescue her from the sea monster, Orca. Girolamo da Carpi captured the scene in oils, now hanging in the Museum of Art in El Paso, Texas.

In Hoban's novel, our hero is the hippogriff who names himself Volatore and seeks out Angelica with whom he has fallen in love. How can an imaginary animal love a woman from a poem? He makes himself real, but finds she has become real, too, far away in San Francisco. Even when they find each other, their joy is momentary because reality just can't bear such dreams being made real. Some bon mots:

"Everything is real, Angelica. Reality is a house of many rooms, and sometimes we can enter more than one. Ariosto's words put real wind under my wings, made me fly. It was not only words on paper--I remember the air rushing past me, remember looking down on plains and forests, mountains and oceans. I lived, I flew over the sea in a painting by Girolamo da Carpi in a time long past."

"Why are you in my dream of reality?"
"I don't know. Reality is a mystery to me and that's how I like it; an understood reality can only be an illusion."

What can I say? It's Hoban-esque: playful, intelligent, sexy, irrational, thoughtful, sad, happy and fun. If you like that, you'll like this.

Look for the full list of overlooked books over at Patti Abbott's blog. er, Todd's blog.

Or on my blog, this week. I really need to dig into Hoban's work...

D'oh! Fixed now. Yes, you must! He's quite unlike anyone I can think of.